The largest photograph in the world: never seen on the market

A life-sized, hand-coloured photograph of the famous world map made around 1450 by Fra Mauro, the greatest medieval map of the world: an astonishing accomplishment of art history, cartography, and photography. In its day one of the largest photos ever made, the "Naya Fra Mauro" belongs to a class of colossal early photographs that includes Eadweard Muybridge's 13-sheet panorama of San Francisco (1878) and George R. Lawrence's photograph of the Alton Limited on an 8 × 4.5-foot glass plate (1899). It also appears to be the first large-format map produced with photography.

Fra Mauro's map is "considered the greatest memorial of medieval cartography" (Almagià). Containing hundreds of detailed illustrations and some 3000 descriptive texts, it was the most detailed representation of the world so far produced. It remains one of the most important works in the history of cartography, marking the end of Bible-based geography in Europe and the new embrace of more scientific methods which placed accuracy ahead of religious or traditional beliefs. Strikingly, it is oriented with south at the top, recalling the Arab tradition and more specifically al-Idrisi's famous 12th century world map, copies of which Fra Mauro may have known: Europe is shown at the bottom, and Africa and Asia dominate the image, with Arabia (not Jerusalem) at the centre. Fra Mauro incorporated "the discoveries of Marco Polo and the Portuguese", also showing "many countries later known, which the learned monk doubtless shaped after ideas gathered from the oral narratives of occasional travellers" (Müller). Much of the map's novel information was lost to early modern cartographers when printed Ptolemy atlases proliferated in the final decades of the 15th century, replacing the manuscript mappamundi tradition.

Today the original Fra Mauro Map, drawn on vellum, is held by the Biblioteca Nazionale Marciana in Venice and shown at the Museo Correr. An impressive manuscript facsimile, now in the British Library, was prepared in 1804 by the British antiquarian William Frazer; a large engraving was made in Paris in 1849, and in 1869 the Venetian bookseller Münster produced the first photographic reproduction, albeit at a much smaller scale, measuring a mere 62 × 68 cm. Carlo Naya's monumental Fra Mauro photograph renders the map in its full original size. Although it is mentioned in a number of books on early Italian photography, it was always extremely rare: the only photographic copies of the map ever to have surfaced in the trade were that of Münster (lot 1581 at the 1884 sale of the library of Henry C. Murphy, U.S. ambassador to the Netherlands under Lincoln) and the more common four-print photofacsimile published in 1879 by Ongania (E. P. Goldschmidt, London 1930: cat. 22, lot 32). By contrast, Naya's magnum opus was never sold except through his own concern. The Royal Geographical Society was presented with a specimen in 1873 (the gift of John Benjamin Heath, once Governor of the Bank of England), and the British Library holds another, as does the Marciana (all uncoloured). A very fragile and faded example, cut into 16 sheets and backed onto modern board, is kept at the National Library of Wales, Aberystwyth.

Carlo Naya (1816-82) was an Italian photographer known for his fine views of Venice. He settled there in 1856, opening a photo studio that catered to Grand Tourists who wished to take home mementoes of the city's spectacular art and architecture. His "mappa mundi" photograph was prepared around 1871 under the supervision of the Venice-based English historical scholar Rawdon Brown (1806-83), a friend of Ruskin's. Naya exhibited his photograph at the 1873 World's Fair in Vienna, winning a medal for it. In the 1880s the Nayas were still advertising the map, the pride of the company, as a "fac-simile of the Planisphere of Fra Mauro A.D. 1459, the largest photograph hitherto made (a square 7 Ft. 4 inch)". It was priced at a stupendous 200 francs. After Naya's death, his studio was continued by his wife, then by her second husband, for three and a half decades.

Provenance: the reverse has ink stamps of the publisher Osvaldo Böhm, who bought most of Naya's archive when the family closed the shop in 1918. Later in the collection of Dr. Edward Luther Stevenson (1858-1944), one of the most important scholars of early cartography active at the end of the 19th and the first half of the 20th century. Stevenson was responsible for numerous carto-bibliographic books, including the first translation of Ptolemy into English, as well as a series of impressive facsimile maps. Stevenson, who viewed reproductions as integral to the study of early cartography, committed himself to building an unparalleled collection of photographs of early maps and globes. Much of his collection was donated to Yale University after his death, but the present item comes from a large corpus of photos, manuscripts, and related material retained by the family. 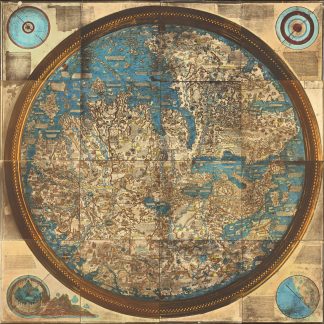