8vo. (8), XXXXV, (1), 104 pp. With engraved dedicatory headpiece and 8 (instead of 10) engraved plates (some depicting cuts of diamonds) and tables. Contemporary smooth calf with gilt cover borders and red spine label.

Hinges weak, corners and spine-ends bumped and chipped. Lacks the final two plates (showing the cuts of the largest diamonds). Provenance: 20th century handwritten ownership to title-page. Removed from the Library of the Birmingham Assay Office, one of the four assay offices in the United Kingdom, with their library stamp to the flyleaf. 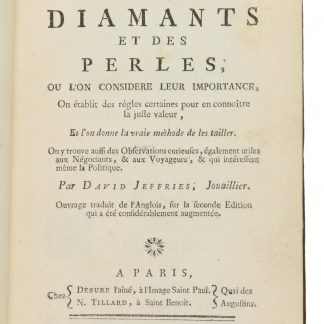