A unique account documenting the restoration of Turko-French relations after Napoleon's campaign in Egypt and Syria between 1798 and 1801, describing how several unspecified objects confiscated during the campaign were returned by the Ottoman press to the French. Fleurat, who served as chancelier provisoire to the French legation, here reports that he was accompanied by the orientalist and linguist Jean-Daniel Kieffer (1767-1833), who counter-signs the document, to the Aynalikavak palace in Istanbul. Here they were handed over the items by Müderris Abdurrahman Efendi, the first manager of the Mühendishane printing house (opened in Istanbul in 1797, the house that would publish the famous Cedid Atlas in 1803). The objects, Fleurat reports, were then transported to the French embassy for safekeeping. His account also mentions that the diplomat Jacques Argyropoulo, appointed by Ibrahim (Müteferrika) Effendi, the pioneer of printing in the Muslim world, was present at the handover, and refers to a list of the received objects which has probably not survived.

From the collection of the Turkish author, journalist, and publisher Sevket Rado (1913-88), founder of "Tifdruk" printing house.

Small tears to the left and right margins along the centrefold, not touching the text; a few minor edge flaws. 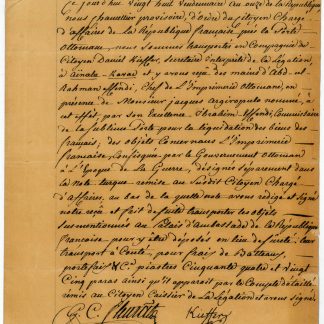