A rare copy of what likely is the only extant written record of the situation of Muslims in Brazil in the 19th century, a minority formed mostly by former African slaves and their descendants. Abdurrahman was a crew member of one of two Ottoman warships thrown off their course to Basra by a storm on the Atlantic near Cape Verde, which dragged them in the opposite direction, to Rio de Janeiro. While his companions continued their voyage to the Arabian Gulf, Abdurrahman remained in Brazil, and his account focuses entirely on his religious work there. He describes the lessons he gave and a Portuguese booklet he prepared to outline the basics of Islam, which was memorized by most of his students, and he criticizes their way of life, including their former religions, their practice of fasting in the month of Saban instead of Ramadan, and the frequent baptism of Muslim children. The book includes geographical descriptions of Brazil and Rio de Janeiro and mentions tropical fruits unfamiliar to the author, who finishes with the route he took home to Istanbul a few years later, including stops at Lisbon, Cordoba, Tangier, Mecca, and Damascus.

While it discusses the voyage to the New World only briefly, this is in fact the second of two known accounts of the first voyage ever made to the American continent by the Ottoman navy, published only three years after the other travelogue (by Faik Bey). Abdurrahman wrote his account in Arabic and had it translated into Ottoman Turkish by Antepli Mehmed Serif.

A small waqf stamp to the final page. Covers slightly faded, else very good. Several copies in libraries worldwide, mostly in the United States, but none in auction records. 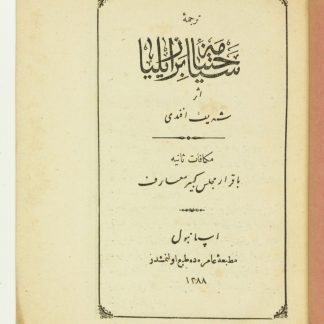