Rare manuscript map of Kosovo Vilayet, an Ottoman first-level administrative division, showing the borders of the sanjaks in red and marking cities including Üsküp, as well as rivers and railway lines. It includes the Novi Pazar Sanjak, which was set up in 1865 as a result of the abolition of the Bosnian state and the establishment of the Ottoman Empire's Bosnia Province. With the Treaty of Berlin in 1878, the Novi Pazar Sanjak was separated from the Bosnian Province in 1879 and connected to the Province of Kosovo. The Taslica Sanjak was established in 1880 and consisted of Taslica and Prepol Kazas, with Austrian-Hungarian garrisons in the Priboy district. Following the defeat of the Ottoman Empire in the First Balkan War of 1912-13, this sanjak was shared between Serbia and Montenegro with the London Agreement in 1913.

With the personal seal of the cartographer Dervish Mustafa on verso. Somewhat brownstained and creased. 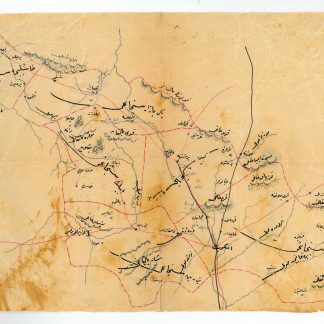