A miscellancy of the two principal works of the classical Turkish Mevlevi poet known as Sheikh Galib. As merely 506 copies were published, it can be considered the rarest divan book produced by the Bulaq printing house, the first official and governmental printing press in Egypt, founded in 1820. The "Divan" reflects Galib's preoccupation with mystical religious themes, his poems being characterized by highly symbolic language, complex conceits and wordplay, while his magnum opus, the allegorical mathnawi "Hüsn ü Ask" ("Beauty and Love"), consists of 2101 verses with a strong Sufi theme. It tells the tale of two lovers, Hüsn and Ask, and the tribulations imposed on Ask by the elders of their clan, in order to be granted Hüsn's hand in marriage. All names used in the story, including those of characters and places, are Sufi terms. The story is ripe with symbolism and is meant to be taken not literally but for its symbolic meaning: man's journey towards God.

A pioneering work of symbolism in Turkish literature. 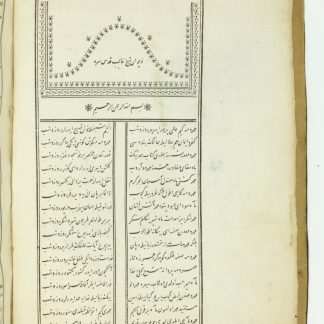