First (and only) edition of this early grammar of Ottoman Turkish, the fourth book known to have been printed at the French embassy press at Constantinople established by Choiseul-Gouffier in 1787. The Arabic types were supplied from Basel. The oriental scholar Viguier (1745-1821), who was apostolic prefect and resident at Constantinople from 1783 to 1802, was the first to distinguish in Turkish the exclusive use of either guttural or palatal vowels within a single word. His grammar is printed with the Turkish transliterated, although some sentences are printed in Ottoman script together with their transliteration.

The books printed at the embassy press were "mostly military or scientific and included Turkish translations of Fitte-Clave's 'Elémens de castramentation' and Truguet's 'Tactique navale'. Choiseul-Gouffier was keen to see printing re-established in Turkey, and there may well have been some degree of co-operation between his press and the refounding under Abdul Hamid I of the Turkish press (first established by Ibrahim Müteferrika), which led to the printing of Vauban's work on mines, the 'Fenn-i Lagim'. The press was mostly used for the production of materials used by the embassy" (Atabey). The subscribers included mostly merchants resident in Turkey, although some names from Smyrna and Saloniki are also to be found, as are various missionaries, the English ambassador Ainslie, Count Ludolf, ambassador of the King of the Two Sicilies, and Pierre Guys, author of "Voyage littéraire de la Grèce". 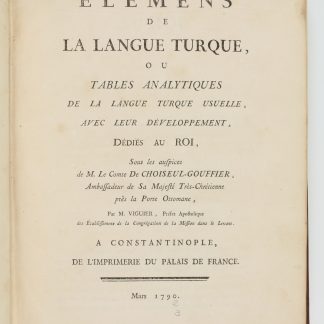