A copy of the Turkish sports magazine "Sports World", published weekly in Istanbul between 1919 and 1929. The photographs show various competing national teams, including the Turkish football team, as well as a bare-chested athlete bearing numerous medals. Includes a section on the 1928 Olympic Winter Games held in St Moritz, with a photograph of the ice hockey match at which Canada scored the gold medal against Switzerland. An advertisement depicts a runner dressed in white, with the Olympic flag in the background, surrounded by portraits of six athletes on the cover. 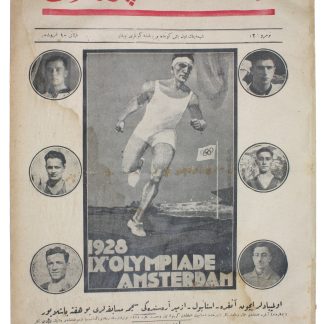