From the print shop of the monastery of St Blasien

Deluxe edition of the important collection of decrees by Emperor Rudolf I, edited and provided with extensive commentary by the abbot of St. Blasien monastery, Martin Gerbert (1720-93), who is considered "one of the foremost representatives of scholarly Benedictine monasticism towards the end of the baroque era" (cf. NDB VI, 257f.). The work is divided into three parts: part I constitutes an account of Rudolf's deeds, including his victory over Ottokar II of Bohemia, while the actual collection of decrees makes up part II (in three books), comprising Rudolf's decrees as King, and later as Emperor. Part III, the "auctarium diplomatum", is an addendum of charters issued during Rudolf's reign, including the one sealing the transition of the parts of Austria formerly ruled by Ottokar to the house of Habsburg.

The frontispiece by Peter Mayr, dated 1771, shows Rudolf's coronation as Holy Roman Emperor. The other illustrations, designed by Johann Jakob Dorner and engraved by Johann Baptist Haas, include a picturesque view from Limberg mountain near Sasbach with the ruins of Limburg castle, as well as Rudolf's election as King. 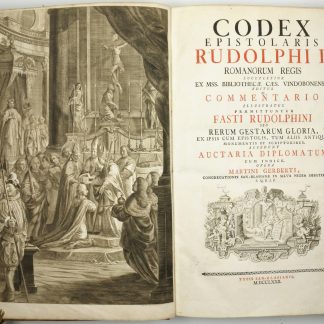