Complete typescript of the piece "Les Cenci", with some corrections. Artaud has signed twice, at the top of the first page and on the last page; some small corrections written in black ink do not seem to be from his hand. "A beautiful black masterpiece is the only legacy that is still important to leave [...] For I, the old count Cenci [...], it happens more than once in my dreams to identify myself with destiny" (transl.). Artaud finished Cenci's text, a "tragedy in four acts and ten paintings on a theme of Stendhal and Shelley", at the beginning of February 1935. The dress rehearsal took place on 6 May 1935 at the Théâtre des Folies-Wagram. The play left the stage after 17 performances. Artaud played the main role, that of Count Cenci, and directed the production according to the principles set out in Le Théâtre et son double. Balthus designed the sets and costumes. The critics were divided; the play was notably praised by Pierre-Jean Jouve: "The will of Antonin Artaud joining that of Balthus is everywhere: the extreme points appear in the emphatic and dark play of Artaud himself, in the incandescent beauty and the childish, wild action of Iya Abdy". An invitation card is attached to a gala performance of Cenci at the Théâtre des Folies-Wagram on 7 May 1935.

Small damage to edges on some sheets; on browned paper. 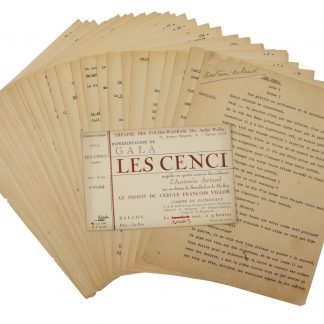