Comprehensive manuscript of the celebrated "Pastorale de Noël", a delicate, simple and naive work of incidental music set to a text by Léonel de La Tourasse and Gailly de Taurines after an episode of Arnoul Gréban's "Mystère de la Passion". The score was published by Heugel in 1901 in a splendid edition with covers and titles imitating Gothic prints, its engravings being based on the present manuscript. The pastorale was performed in private at Madeleine Lemaire's house on Christmas 1906, with Hahn at the piano: "At Madeleine Lemaire's house, we celebrated "New Year's Eve" with Reynaldo Hahn's delicious Christmas Pastoral, performed in charming settings by children and a few grown-ups, including a lively donkey. A real evening of art. It was exquisite and we wanted to do it all over again. The score is a real little masterpiece" (Le Ménestrel, 29 Dec. 1906). The public premiere took place on 23 December 1908 at the Théâtre des Arts, under the direction of Désiré-Émile Inghelbrecht, and was acclaimed by the critics: "The music of Mr. Reynaldo Hahn has no other pretension than to underline [...] the precious mystery that unfolds on the stage. And it accomplishes its task with a dignity, a sobriety, a simplicity which are not, at this time, mediocre merits. The score is composed of old Christmases, but the pages that follow them, the way they are presented, their instrumentation, are exquisitely delicate; a few keys, here an instrumental touch, an accent, there a harmonization, reveal the subtlety of the musician" (Robert Brussel).

The manuscript for voice, chorus and piano is mainly in dark blue or black ink, on 18- or 20-line Lard-Esnault/Bellamy paper. It includes numerous erasures and corrections and bears traces of changes in the cutting and numbering of the music pieces, three of which are accompanied by the first draft.

An important work of christmas pastorale music and a unique survival in very good condition. 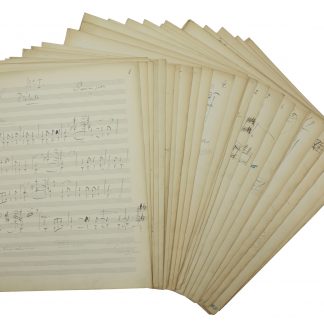