In French, to André Reichel, nephew of Coubertin's beloved friend, the pioneer sports journalist Frantz Reichel. Himself a boxing, running and rugby champion, Frantz Reichel was very involved in the creation of sports associations such as the "Union of Athletics French Societies" mentioned in this letter, foreshadowing the French Olympic Committee.

"My dear Mr Reichel, It seems you are asking my opinion, for your personal use, I am giving it to you with great pleasure, under the auspices of our dear Frantz, your uncle, whose keepsakes, letters and articles are always with me. But I do not see any reason why I should speak my mind publicly in the newspapers. French athletes have pushed me away so far (much more because of their nonsense than because of their ungratefulness and wickedness) that I do not know anything about them now, and I don't care about their opinion. Unfortunately, in this field, just like in many others, France only follows and gives, with many speeches, the illusion of commanding. Other countries are the real commanders. Fortunately, I am confident that the French energies will wake up soon and that King Louis-Philippe II who is currently in power will be overthrown by a new 1848 revolution. I do not know if it is still possible to use the solutions you are suggesting. I'm afraid not. As I have already written, I was really wrong to accept Mr de Saint-Clair's demands and to use USFSA, mixing clubs and school associations. 44 years ago! During the War, I had the opportunity to fix this mistake. This was the conclusion of my report to the Minister, following the mission he entrusted to me. Please find attached this report which is now very difficult to find and as well the text of the Charter of Sports Reform. I am sending as well a copy of the anthology that was given to me for my 70th birthday in 1932. I can imagine you at your uncle's office in the Figaro newspaper's building. This book will be near the table on which he was writing, where he died, and where we have so many times discussed about his setbacks and hopes [...]". 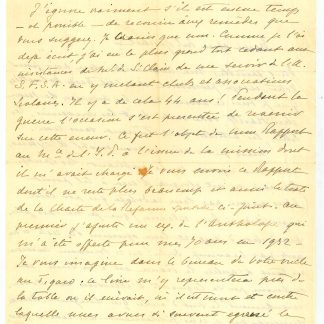