From the first Thai-script printing press in Siam

Signed presentation copy from the printer's wife: a rare example of printing from the first Thai-script printing press in Siam, printed in Thai throughout. Inscribed in English on the verso of the title-page to "Deacon S. Hastings, from E. R. Bradley".

The Protestant missionary Emilie Royce Bradley passed away in 1845. She and her husband, the New York-born Dan Beach Bradley, had landed in Siam in 1835. During their time there they contributed significantly to the nation: in particular, they brought with them from Singapore the first Thai-script printing press in Siam, on which, starting in 1836, they published religious material such as this for distribution as well as the first Thai newspaper, the first monolingual Thai dictionary, and the first public Thai proclamation. Dan Beach Bradley also introduced Western medicine and technology to the country, performing the first surgery in Siam. He died in 1873 and is buried in the Bangkok Protestant Cemetery.

Binding rubbed and chipped in places; interior spotted with some staining. "1850" stamped to verso of title. A rare survival. 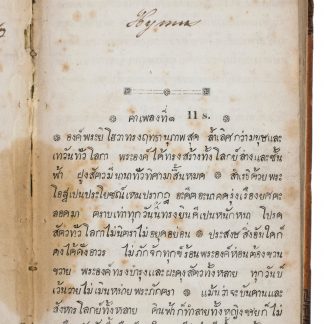