A beautifully illuminated incunabular edition of Pliny’s "encyclopedia of all the knowledge of the ancient world" (PMM), owned by the Ottoni family of Matelica. When first published a mere decade earlier, in Venice in 1469, this work marked the first appearance of any scientific text in print. The present sixth Latin edition is one of the finest specimens ever to leave the press of Michael Manzolus. The colophon is dated 25 August 1479, but a poem dated "Tarvisii tertio idus Octobres Mcccclxxix" (13 October) is found on fol. 3v, probably inserted immediately before printing.

In the present work Pliny gives us by far the most detailed account of the coast of the Arab Emirates that has come down to us. Chapter 28 of bk. 6, beginning near the Qatar peninsula, proceeds to describe the Emirates islands, tribes, and coast right up to the Musandam Peninsula before continuing on south along the coast of Oman. As such, it is a mine of invaluable information on the UAE in the late pre-Islamic era. Pliny "completed his 'Natural History' in 77 AD and, to judge from his account of the peoples and places of south-eastern Arabia [...], the area of the UAE was full of settlements, tribes, and physical features, the names of which he recorded for posterity" (Ghareeb/Al Abed 54).

This splendid copy is illuminated with 37 fine burnished gold initials and a full-page white vine-stem border introducing the beginning of Pliny’s text. Indeed, the "Historia naturalis" is also the most important early source on the history of art, outlining not just the history of ancient painting but also the materials and techniques of the visual arts - including those used in the decoration of this book. A fine coat of arms in the lower margin's border at the beginning of the text indicates that this copy was illuminated for the Ottoni family, possibly Count Alessandro Ottoni (d. 1485), of Matelica in Italy's Marche region. The same owner has left numerous early marginalia: the inhabitants of the Ottonis' native town are mentioned by Pliny in bk. 3, ch. 13 as "matilicates", and the book's owner has marked the relevant line with a manicule. The annotator also paid special attention to sections on the Greek islands (bk. 4), the wonders of India (bk. 6), and the medicinal uses of bugs (bk. 29); a later owner in the mid-16th century added a note referencing the "Hieroglyphica" of Piero Valeriano (bk. 9). 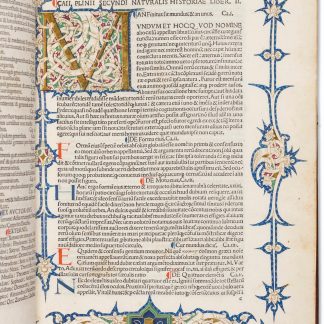