"I have to admit that the immediate reason for this letter is not philosophy but rather the matter of butter": Martin Heidegger's correspondence with Magda Stomps

Wide-ranging, hitherto unpublished German correspondence with the Dutch theologian Magda Stomps (1899-1979), a student of Heidegger and close family friend, reflecting the philosopher's work, political views and private life. Stomps, who was the first woman to study theology in the Netherlands, received a scholarship for the University of Freiburg in 1928, where she studied under Heidegger. In 1935 she graduated with a dissertation on the "Anthropology of Martin Luther". After her return to the Netherlands she published two articles in Dutch on Heidegger's philosophy and worked as an editor and translator. As a member of the Dutch National Socialist Movement, Stomps and her family fled to Germany in September 1944 and remained there after the war.

In the earliest postcard from 15 April 1929, Heidegger informs Stomps that the law professor Gerhart Husserl, Edmund Husserl's eldest son, had visited him and wrote an evaluation for her. The correspondence resumes in late 1935, when Heidegger expresses his concerns about a new generation of students and, more mundanely, asks for butter: "Gradually the older students are leaving, while younger successors fail to grow in. Perhaps philosophy must exit the stage for a while, which is not a bad thing if it manages to grow in silence in the meantime. Naturally coursework used to be easier and more rewarding when every little detail did not need repeated drilling and more general knowledge could be expected. The very youngest semesters now make an excellent impression but they do not stay long enough [...] I have to admit that the immediate reason for this letter is not philosophy but rather the matter of butter. Our eldest son is now visiting us for a three-week vacation. He was sick and generally much in need of invigoration. Hence I should like to ask you, if possible, to provide a kilo of butter for our hut in Todtnauberg around Christmas" (17 Dec. 1935). Many of Heidegger's most important students, including Hannah Arendt, Herbert Marcuse and Hans Jonas, were bitterly disappointed by his embrace of National Socialism and had to flee Germany after 1933. In a typed letter from 14 Nov. 1936, Heidegger promises to help Stomps with her application for a scholarship and sends her greetings from the Dutch philosopher Hendrik Josephus Pos. A letter of recommendation praising Stomps's dissertation is enclosed. Pos is also mentioned in a revealing letter from 15 December 1939, in which Heidegger recalls an earlier conversation: "When Mr. Pos was here last time, I tried to explain to him our situation and the situation of Europe; I told him even then that the Dutch with their stale 'democratic' ideas are, at most, late for everything. These people will open their eyes eventually, much as the English, who, quite regardless of the course and outcome of this war, will suddenly find themselves in a new world from which they cannot evade [...] The students' letters from the front are most gratifying and prove a different sense of historical responsibility than the feeble verbiage of the Dutch humanists who have no inkling of reality [...]". The German invasion of the Netherlands started on 10 May 1940, followed by a devastating five-year occupation. In the following two letters, Heidegger details his then-current work and curricula: "In the next trimester I will focus on the first book of Nietzsche's WzM [Will to Power] after having closely interpreted the third book in previous semesters. In the exercise courses I discuss a purely systematic question: time and space. In addition I have to think about reissues of 'What is Metaphysics?' and the Kant book which have been out of print for some time. SuZ [Time and Being] will also be reissued" (21 March 1940). On 11 Aug. 1946 Elfride Heidegger writes a letter to Stomps to inform her that her husband has been absent for several months "due to illness" and is still recovering. (Indeed, in the aftermath of the war Heidegger suffered a mental and physical breakdown.) Elfride also mentions their two sons, Prisoners of War in Russia.

Heidegger's first personal letter after the war, written on 2 Aug. 1947, details the academic progress and fate of former students and colleagues in Germany, also mentioning his sons: "Our two sons have now been in Russian captivity for 2½ years. Our house in Freiburg is used for billeting and for refugees from Upper Silesia (a fellow student of mine and his wife); [...]. Old Freiburg has vanished entirely". In the next letter, Heidegger complains about revanchism: "You are right, there is plenty of desire for revenge. The gentlemen from the International Congress for Philosophy, in which I am obviously not anxious to participate, could not even bring themselves to send me a formal invitation, let alone an earnest one" (11 Feb. 1949).

In 1951 Heidegger was allowed once more to teach at the university. That spring he mentions a "small exercise course" that is more like "an experiment, to test the waters, whether it is [...] still worth my trying something" (24 May 1951). Throughout the post-war correspondence Heidegger considers ways to support Stomps, ultimately pinning his hopes on the establishment of the Husserl Archive in Cologne: "Unfortunately, I will leave in the coming days for the rest of August, numerous visits making work impossible. The most difficult task is to separate welcome visitors from the merely curious. [...] To my joy, I heard that the Husserl Archive will actually come about" (7 Aug. 1951). In spite of the involvement of Heidegger's former student Walter Biemel, Stomps failed to find a position at the Archive. In the last two letters by Elfride Heidegger, she considers emigration to Argentina as an option for Stomps: "We went back and forth on what advice and help we could send you in reply to your letter. But we, too, have no solution. Is it not possible - even now after 7 years - that you return to Holland and support yourself through your property? We cannot think of the least thing to do for you here in South Baden. My husband lives in seclusion and has not connections at all to possible places of influence. I could only think of asking Prof. [Carlos] Astrada from Argentina, who will come here soon, if there are any job opportunities over there" (31 May 1952). Later, the Heideggers referred Stomps to Hans-Georg Gadamer: "It would be good if you wrote to Prof. Gadamer, who took care of the contacts to Argentina back then. Prof. [Eugen] Fink stongly advised against trying to establishing oneself there, arguing that the conditions are too uncertain and exceedingly difficult if one has no perfect command of Spanish perfectly" (15 July 1952). Stomps probably abandoned these plans or returned to Germany very soon, where she continued to work as a teacher and translator.

Occasional creasing and brownstaining, but overall in very good condition. 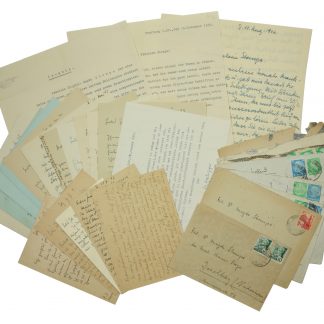