Schematic map of Asia Minor in brown ink and red pencil showing in detail the routes of two journeys, entitled: "Route de Busbek de Constantinople a Amasie" and "Route de M. des Monceaux d’Alexandrette a Smyrne", charting numerous towns, important ancient sites such as Pergamon, Ephesus, and Laodicea, as well as geographic markers. The route from Constantinople to Amasya is a graphic reconstruction of Ogier Ghiselin de Busbecq's famous travel account "Itinera Constantinopolitanum et Amasinianum" from 1581. The Flemish humanist and botanist Busbecq (1522-92) served as the ambassador of Emperor Ferdinand I at the Sublime Porte from 1555 to 1562. In the first year of his term, he accompanied Suleiman the Magnificent to Amasya in Anatolia, where the Sultan signed a peace treaty with Shah Tahmasp I that ended the Ottoman-Safavid War (1532-55). Busbecq, who devotedly collected local plants, ancient manuscripts and coins, proved a capable diplomat and an unprejudiced observer of Ottoman society. Soon after his travelogue he published some of his diplomatic relations in separate volumes and, as a collection, "Legationis Turcicae Epistolae Quatuor" (1589), which remains an important source for studies of the 16th century Ottoman court.

The life of the French treasurer and early Fellow of the Royal Society André de Monceaux (d. after 1671), famous during his lifetime for his journeys to the Near and Middle East, remains largely obscure. A copy of a collection of Greek and Oriental manuscripts at the French national library is tied to his name, together with instructions by State Minister Jean-Baptiste Colbert dated 30 December 1667 to aquire rarities for the royal collection and a mémoire on Greek manuscripts by Colbert's assistant, Charles Perrault (BNF: R 138637). De Monceaux "was to look for fine copies of ancient manuscripts in Greek, Persian and other Middle Eastern languages; antique medals, provided they were struck, not moulded; antique engraved stones; and fine goatskins [...]" (Meynell, p. 12); it appears he returned with 62 thick volumes of Greek manuscripts. In a letter to the secretary of the Royal Society, Henry Oldenburg (dated Paris, 26 July 1670), de Monceaux mentions that "he had no wish to publish his own notes unless ordered to do so by the King" (ibid.). According to Bernard de Montfauçon these travel notes were later in the possession of de Monceaux' sister but have since been lost.

For his detailed reconstruction of the route from Alexandretta to Smyrna (Izmir) Barthélemy must have been familiar with de Monceaux' notes or other now unavailable sources. Since both travellers collected coins and medals as well as manuscripts, Barthélemy's interest in their journeys is unsurprising, but the context of his map remains open. It may be connected to the extensive research he performed for his "Travels of Anacharsis the Younger in Greece" (1788), which comprised several professional maps.

Jean-Jacques Barthélemy is best remembered today for deciphering the Palmyrene and Phoenician alphabets and for his early research on Egyptian hieroglyphs. His "Anacharsis" was a considerable literary success and contributed to the growth of European philhellenism.

Some browning and foxing towards the borders. Folded. 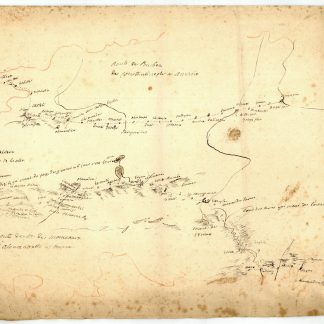