First German edition of the 1491 Latin "Hortus Sanitatis" printed by Jacob Meydenbach, translated by Johann Adolph Müling and illustrated with over 500 woodcuts. Divided into four parts, it discusses terrestrial animals, birds, and fish as well as gemstones and their purported medicinal properties, also boasting an index of medications. The full-page woodcut shows a human skeleton with the captions identifying various bones in Latin and (in one case) in Arabic; two half-page woodcuts show a man on his sickbed, while the many smaller-scale woodcuts mostly depict animals, sometimes in interaction with men.

Complementing Prüss's 1507 "Herbary oder Krüterbuoch", this book initiated the tradition of the so-called "Gross-Gart der Gesundheit" ("Enlarged Garden of Health”), combining Johann Wonnecke von Kaub's 1485 herbal "Gart der Gesundheit" with the non-herbal parts of the anonymous 1491 "Hortus sanitatis". This combination changed the nature of the "Gart" itself, in that it became less of a pure herbal and more of an encyclopedic work, much like the "Hortus" that it came to resemble. This so-called "Gross-Gart" tradition started from here and was successfully continued by Prüss's successor and son-in-law Renatus Beck and his son Balthasar Beck, who published no fewer than five editions of the enlarged two-volume "Gart" between 1515 and 1530. For the illustration of those volumes, which dealt with animal, metallic and similar matter, Prüss apparently used his own woodcuts, as they are "different from the corresponding ones in the earlier editions" (of 1496/97, Karl Becher). An extract version in English, by Lawrence Andrew, appeared as "the Noble Lyfe" as early as 1491. "The separation of the Gart from the Hortus material made it very easy to regard the books on animals and stones as a separate work, as the Dutch (Antwerp, 1518) and English editions (London, after 1520) indeed bear out" (Luuk Houwen).

II: This very scarce German edition of Vegetius's "Four Books of Knighthood" with its splendid illustration cycle stands out as the most exquisite achievement of Erfurt's book production in the first half of the 16th century. Based on an earlier 1480 German edition conceived by the humanist Ludwig Hohenwang for Count Johann von Lupfen around 1475, it is an anonymous new translation of "De Re Militari", the well-known treatise by the late classical writer Vegetius about Roman warfare and military principles, based on sources dating back as early as the late 4th and early 5th centuries. Vegetius's work epitomizes the only account of ancient Roman military practice that has come down to us intact. His four books discuss recruits, organisation, strategy and tactics, fortification and naval warfare. The fourth book on siege-craft contains the best description of Late Empire and medieval siege machines known today. The German edition was updated to include 16th century weaponry, some of which is quite fanciful. With the important exception of Wiener's Augsburg imprint of Hohenwang's translation, illustrations - in the form of woodcuts depicting particular aspects of war - did not appear before 1511 or 1512, especially from Knappe's Erfurt press. The impressive and large woodcuts in this book were only marginally inspired by those of the 1475/76 Valturio edition printed at Augsburg as well. They were in fact made and supervised by Peter von Mainz (his monogram PVM) and members of his workshop. We can distinguish at least five different hands. The other monograms, such as "MS", could perhaps refer to Melchior Schwarzenberg. The illustrations depict siege devices, machines for battering down doors and fortifications, including what is thought to be the first known printed depiction of a diving suit (Piiiv). Only a few months after the present book had been published, Knappe apparently issued another, undated version without a title and even without text, containing an extended but separate woodcut cycle of now 195 illustrations. These would again be copied and downscaled in 1515 to re-appear in Nicolaus Marschalk's “Institutiones reipublicae militaris”.

III: Rare German edition of the "Tree of Kinship" ("Baum der Sippschaft"), richly illustrated by woodcut genealogical trees. Following the 1474 Augsburg editio princeps (in Latin), the “Lectura super arboribus consanguinitatis” became a true publishing success which went through dozens of subsequent editions. It explains and visualises all degrees of kinship, including affinity, which was particularly relevant to canon marital law and also became important in the law of inheritance. It was aimed in particular at the clergy, local courts and notaries, and included a commentary on the doctrine of family relationships regarding "permissible" and "unpermissible" marriages. The illustrations were in fact so influential that versions of the genealogical woodcut illustration as we find it on the verso of the title-page were used as graphic aids at law schools as well as for judicial trials and in legal ordinances issued by the princely sovereigns until the late 18th century. From very early on, the German version of Johann Andreas's work was enriched with a chapter of folksy kinship riddles.

The blindstamped binding, dating from ca. 1563, incorporates scenes from the life of Christ, including the Annunciation, Baptism, Crucifixion with the Brazen Serpent, St John the Baptist, Adam and a soldier (with an initial M and the date 1558), and Resurrection. Outer and inner frames filled with palmettes, while the centre-piece is surrounded by two borders incorporating heads, shields, the Augsburg coat of arms and the initials "MG". All roll-stamps, such as the one with the Passion of Christ, can be identified and attributed to the workshop of Matthias Gärtner in Augsburg (Bavaria/Swabia, Germany), who was active there between 1563 and 1590 (cf. Einbanddatenbank: EBDB w004385 [workshop], EBDB r003480 [tool]). For the other roll-stamps from the same workshop cf. EBDB r004193 (frieze with palmettes) and r003532 (warriors' heads in a medallion and coat of arms of the city of Augsburg).

Front pastedown chipped with two lines of washed-out ink and a couple of modern bibliographical pencil inscriptions; illegible library stamp on title-page of Vegetius. A few occasional marginal tears, some of them repaired; 2 larger tears in quire Oiv of Vegetius repaired. Last pages of Vegetius a little brownstained in places.

A unique miscellancy of three milestone works in excellent condition. 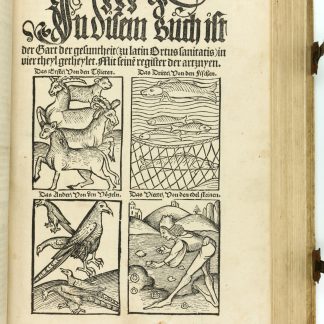