London, printed for the Oriental Translation Committee, and sold by J. Murray, 1829-1831.

The first two parts of this chronicle by Paul Zaim of Aleppo (1627-69), an Ottoman Syrian Orthodox archdeacon. Son of Patriarch Macarios III Zaim, Paul accompanied his father in his travels throughout Constantinople, Wallachia, Moldavia, Ukraine and Russia, as an attempt to raise funds and support for their church. Paul's account of his visits, originally written in Arabic, is important as a source on Wallachia, as it documents the main events of Constantin Serban's rule and the Ottoman expedition of 1657.

Published for the Oriental Translation Fund of Great-Britain and Ireland, by R. Bentley, this copy with special half-titles printed for the subscriber Sir Archibald Kennedy, 1st Marquess of Ailsa (1770-1846), then styled the 12th Earl of Cassilis. Seven additional parts would appear by 1836. 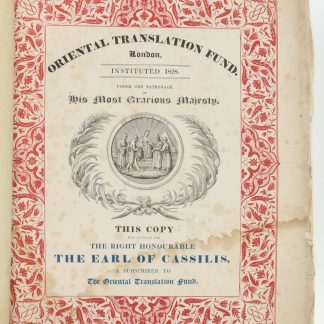