A highly appealing manuscript on saddlery from Marshal Radetzky's library, discussing the production and characteristics of German and Hungarian saddles with the exact measurements of each component. Possibly not written by Radetzky himself but commissioned by him at a time when he was applying himself to military studies and editing his memoirs ("Denkschriften"), the manuscript is composed in extremely neat handwriting, likely by a secretary. The charming watercolours depict complete saddles seen from various perspectives as well as several stages of their construction and separate elements such as straps and screws.

Radetzky's bookplate to front pastedown. A note about the length of a saddle flap in a different handwriting, this likely by Radetzky himself, is loosely inserted.

Extremities lightly bumped; spine label a little rubbed. Paper evenly browned throughout; plates crisp and clean. Seven plates are preserved only in fragments: substantial parts are cut out of and lacking from three plates; of four others only the cut-out figures remain, which are loosely inserted. 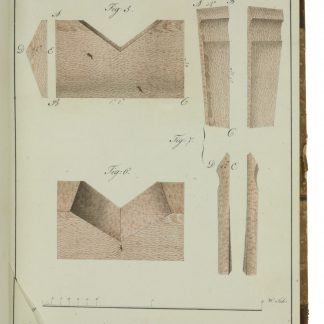