About the first printed edition of the Qur'an in Arabic

Only edition. This rare treatise in the form of a letter addressed to the Arabist and bibliographer Schnurrer discusses the famed sixteenth-century Venetian edition of the Qur'an in Arabic. De Rossi, the distinguished orientalist and librarian of Parma, here proves that Paganini ceased printing in 1518, at which time he was succeeded in his business by his son Alessandro. Rossi therefore places the printing of the Qur'an at 1518 or earlier, although others have proposed it could have been printed as early as 1509, which would have made Paganini's Qur'an the first book printed in Arabic. In fact, Paganino and Alessandro Paganini produced what was the first printed edition of the Qur'an in Arabic, probably intended for export to the Ottoman Empire, between 1537 and 1538. While there existed numerous contemporary reports of its existence, all physical evidence of it disappeared for centuries, and rumor had it that the Pope had the complete print run burned. The book was long even considered a bibliographical "ghost" until a single copy was rediscovered in the library of the Franciscan Friars of San Michele in Isola, Venice, by Angela Nuovo in 1987 (cf. A. Nuovo, "Il Corano arabo ritrovato", in: Bibliofilia LXXX.9 [1987], pp. 237-272, and the English translation in The Library, 6th series, 12.4 [1990], pp. 273-292).

Uncut and untrimmed as issued; a wide-margined copy of this fine Bodoni imprint in perfect condition. 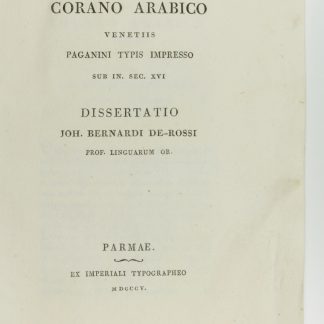