To the English novelist Catherine Hutton (1756-1846), describing his ascent of Mont Blanc made on 25-27 August 1825: "I believe, Madam, you have never been in Switzerland; if your travels should have led you to explore that lovely country, I suppose you did not reach the summit of Mont-Blanc. I have been to that terrific point, & perhaps some few general observations on that journey may amuse you while you are eating your muffin [...] It is somewhat remarkable that since the creation of the world, we are but about 14 travellers, who, by good luck & perseverance, have succeded in gaining its summit: of these, three have been or are confined in mad houses, & therefore, should the incoherency of my letter be great, you will do me the honor to consider me as a fit person to join the unhappy trio [...] You have not, I dare say, read the account I published of the three days passed in these solitary & comfortless regions, where the ice of centuries is your bed, & the blazing vault of heaven your canopy. The ice caverns are remarkable [...] The entrance is guarded by a row of Stalectites formed by an occasional melting of the ice at noon day, & beneath them, are Stalecmites created by the dropping of the water from the points of the others, & thus each cavern has at its entrance, a double row of gigantic teeth of ice [...] From the summit, which is about 200 paces long, little is to be seen [...] The power of the eye is not sufficiently great to distinguish colour [...] If therefore we are in a position where none can be distinguished, we look as it were on a dense London fog, & I never yet heard it said [...] that a city fog was an interesting or a beautiful object. Imagination, however will do much [...] - one of the travellers said formerly, that he could see the Mediterranean sea from Mont-Blanc: I have proved in my relation, the impossibility of such power of the eye [...]".

With 4 strips of old mounting tape on verso. Loosely enclosed is a lithographed portrait of Sherwill. 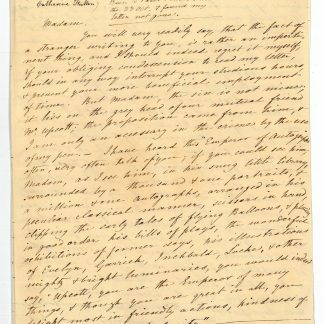