To the Earl of Buchan, thanking for an honour bestowed on him by the Society of Antiquaries, and with the proposal for a critical edition of cartularies: "I am to make my acknowledgements to your Lordship for the polite manner in which you have communicated to me the honour meant to be conferred on me by the Society of Antiquaries. It is an honour of which my avocations & present course of life will not allow me to profit. Permit me, however, to suggest a thing to your Lordship which is far from being impracticable, & is of considerable moment for perfecting the intentions of your society. I mention it shortly - sale of 250 Copies is full indemnification - in proper size, co-inciding with the English Society etc.

Chartularies ought to be published - leaving out repetitions, & only pointing at Grants confirmed, Index of names to each volume, general index to whole, a short Chartulary to be tried as a specimen - such as Lenox or Newbottle. Chartulary of Inchaffray, in a private hand, is also short. Supposing the Chartularies once printed, these will be a foundation for a Glossary; if every one lends his aid, it will be a work of value [...]". 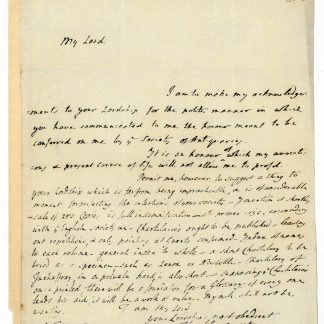