To Thorton Leigh Hunt, editor of The Daily Telegraph, about a misunderstanding: "I enclose my correspondence with Mr. Dunning to which I suppose your letter of yesterday's date refers. It is quite clear there has been some mistake or misrepresentation but I am content to leave the matter as it stands. If, however, you wish on Mr. Levy's [i.e., Joseph Moses Levy, the printer of The Daily Telegraph] part to make any explanation respecting it, you will find me here at 3 o'clock to-day [...]" (14 Jan., no year).

To the editor of the London newspaper "The Globe, marked "Private", asking him not to publish any notes about his upcoming tour of the United States: "Mr. Delane presents his Compliments to the Editor of the Globe and would be very much obliged if the Editor would exclude from his columns any notice which may appear in the American papers of a short tour which Mr. Delane thinks of making in the United States. Mr. Delane need not assure the Editor of the Globe [...] that he will [...] abstain from taking part in any public proceedings. Under these circumstances he hopes that the Globe will allow him to enjoy the ordinary privacy of an English tourist whatever nonsense may be written about him in the American papers. It may seem presumptuous to think such a request necessary but Mr. Delane has already seen in some of the Transatlantic journals paragraphs respecting his tour & its object which he should be very sorry to see reproduced in England [...]" (24 Sept. 1856).

Each with 2 small strips of old mounting tape on verso. 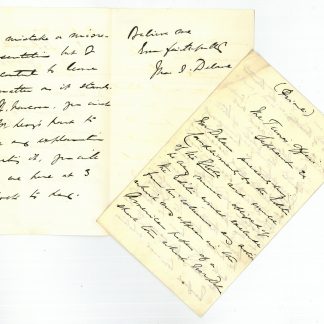