Call for donations "to all supporters of the Penny-a-Week Fund" to ensure the provision of medical supplies for Russia: "The magnificent resistance which the brave Russian people are making against Nazi aggression arouses not only our intense admiration, but a unanimous and urgent desire to give every possible help. I want to tell you about a simple but practical way in which everyone in Britain can now turn that desire into action. The War Organisation of the Red Cross & St. John has already sent over 100 tons of medical supplies to Russia, but the scale of the help which the War Organisation and the British public desire to render to Russia is so vast that it has been decided to open a separate Red Cross 'Aid to Russia' Fund. To this will go every penny subscribed to the Red Cross Penny-a-Week Fund during October, November and December. In this way many of the medical requisities which the stricken people of the Soviet Union so urgently need will be supplied at once from the proceeds of the weekly contributions of British working men and women. X-Ray apparatus, surgical outfits, drugs, serums, and many kinds of medical necessity must be sent by the Red Cross to Russia in an ever-increasing flow. Much has already gone; too much cannot be sent. I appeal to everyone to see that during the next two months the Red Cross Penny-a-Week Fund reaches a new high record [...]".

On headed stationery of "The Duke of Gloucester's Red Cross and St. John Appeal". Somewhat creased near the corners with traces of former mounting on verso. 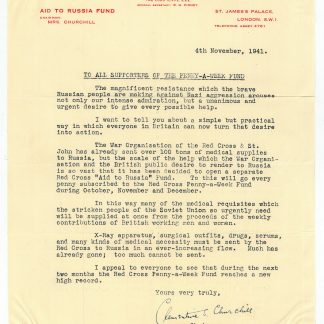