"An astronomy fit for an emperor" (Owen Gingerich)

Large folio (320 x 474 mm). (59) leaves, signatures: A-F4, G4+1, H-N4, O6. 53 eleven-line and 39 six-line historiated woodcut initials by Hans Brosamer, 36 full-page woodcut astronomical figures, of which 21 have a total of 60 (of 83) volvelles with 29 (of 44) silk threads and 8 (of 12) seed pearls. Title in blackletter within an elaborate woodcut border with a large astronomical woodcut of the "Umbra Terra" beneath; woodcut arms of the joint dedicatees, Emperor Charles V and his brother Ferdinand of Spain, on the title-page verso; full-page woodcut arms of the author by Michael Ostendorfer on fol. O6. Coloured throughout by a contemporary hand. With the two letterpress slips pasted on the recto of G4 on either side of the woodcut, and the small letterpress slip pasted over two lines on the recto of K1, correcting the text. Contemporary German blindstamped pigskin over pasteboard, spine on five double raised bands.

First edition of the "most spectacular contribution of the book-maker's art to 16th century science" (Gingerich). Copies in contemporary bindings are of the utmost rarity in the trade. Dedicated to Emperor Charles V and King Ferdinand, the book has been described as "a miracle of printing in folio format: most of the astronomical schemes and instruments have up to six movable parts. Apian received 3000 gold florins from the dedicatees [and] personal appointment as court mathematician" (Woodward). Apian's work contains a broad analysis of Ptolemaic astronomy and "is notable for [his] pioneering observations of comets (he describes the appearances and characteristics of five comets, including Halley's) and his statement that comets point their tails away from the sun" (DSB). The text also describes the use of solar eclipses to measure longitude, the author’s inventions of the meteorscope (for solving problems in spherical trigonometry) and the torquetum (a predecessor of the equatorial telescope), and a variety of astrological concerns. Most of Apian’s observations and theories are illustrated by his inclusion of intricate volvelles, which he believed to be of greater use in providing information on the position and movement of celestial bodies, rather than mathematical formulae.

Apian is also noted for introducing Arabic star names into his maps. In the present work he includes a revision of his 1536 star chart, with the addition of two more Arabic star names ("Angentenar" in Eridanus, and "Yed" in Ophiuchus), and two Latin star names which do not appear the 1536 edition. Apian knew the work of the Islamic astronomer Abu 'l-Husain al-Sufi (AD 903-986). "Al-Sufi, in his Book on the constellations (written around AD 964), gave a detailed account of the 48 classical constellations (which the Arabs knew through translations of Greek astronomical works and through pictorial representations on globes from other sources), complemented by records of star names of indigenous Arabic origin which he took pains to identify astronomically with the respective Ptolemaic stars. It was from this section on the indigenous Arabic star names in al-Sufi's book that Apian extracted a number of names and mentioned them in his own writings, most of them in the chapter in constellations in his Astronomicum Caesareum of 1540" (Kunitzsch).

The Astronomicum Caesareum is "scarcer than the first edition of Copernicus's 'De revolutionibus', which was published only three years later, and it is considerably rarer than the much-sought 1687 'Principia' of Newton" (Owen Gingerich). The collation of the work is understandably complex. In his 1995 survey Gingerich accounts for 111 copies and estimates that there are probably fewer than another 25 copies he did not personally examine (the present copy is among the latter). Of all copies inspected, Gingerich regarded perhaps fewer than 10% as complete or near-complete. While many of the known copies also lacked some of the 59 printed leaves, our copy is textually complete but wants some of the volvelles, threads, and seed pearls that Gingerich suggests would make up an ideal copy. Ours has the 36 full-page plates of woodcut astronomical figures within frames that resemble astrolabes, with six different patterns of handles, of which 21 have a total of 60 volvelles. There are 29 original silk threads and 8 tiny seed pearls (measuring a single millimetre), used as sliding indicators.

Provenance: from the library of a large fraternal organization in Texas (USA), donated by a member of that organization in the 1950s/1960s, in whose collection the book had rested for several decades.

Binding worn and stained with professional repairs. Title soiled and darkened; some dampstaining in the lower gutter and along the outer edge. Occasional foxing and staining to the text, with heavier dampstaining near the end. Several leaves show colour bleeding or offsetting from the plates. A small repair slip of paper affixed to G3r, with a portion of nine lines of text supplied in ink by hand; small paper repair to G5v, affecting six lines of text, with loss of eight words. Occasional very minor worming; a few minor chips or tears to the edges. A very good copy overall, apparently in extensive contemporary use. 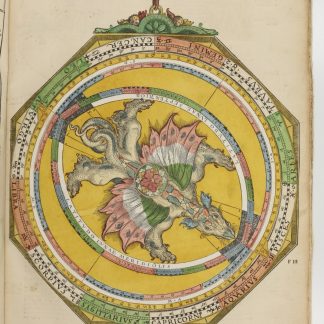