Seicento Poetic Re-Telling of an Amorous Fable, With 9 Engraved Plates

Rare early, augmented edition of this poetic adaptation of the Apuleian myth of Psyche, which enjoyed a rich literary tradition in Italy from Boccaccio's Genealogia Deorum onwards. Either Boccaccio's version or the early vernacular prose translation by Boiardo in 1479 probably served as the basis for poetic re-tellings by Nicolo da Coreggio, Galeotto del Carretto, and the present work of Erocle Udine. Udine's, however, was the first to take the form of an heroic poem, and the first to be published with a set of illustrations (cf Guthmüller).

According to Bodo Guthmüller, while Udine's better-known adaptation of the Aeneid was dedicated to the Duke Vincenzo of Mantua, his Psiche reflected more feminine themes suitable to its original dedicatee, the Duchess of Mantua. This theory is challenged by the present printing, in which the publisher Ciotti re-dedicates the work to a Brescian nobleman, Ottavio Rossi. Ciotti also draws attention to the circumstances of the book's republication, promising the reader: “your much-desired Psiche... improved by the arts of my profession [i.e. editorial], and the argomenti of the most learned Signor Contarini, which give splendor to the light, soul to the soul, and spirit to the work with the same liveliness and wittiness [as Udine]”. New to this edition, Contarini (a playwright and poet in the literary circles of Early Modern Padua) contributed 8-line digests of each canto, attempting to give a helpful summary of the action.

Udine's work itself is divided into 8 cantos to cover the rather elaborate narrative. Beautiful Psyche attracts the jealousy of the goddess Venus, who commissions Cupid to work her revenge upon the mortal. Cupid, however, falls in love with the girl and instead kidnaps her, keeping her in a mysterious chamber where pays her 'nocturnal visits' in order to preserve his anonymity...and so on. The engravings, of which the first is signed (“I. Valegio F.”), were executed by Giacomo Valegio (fl. 1570-1600). Similarly to Contarini's digests, the plates attempt to summarize several episodes at once – one or two in the background, another in the foreground. As this can get a little confusing for the reader, each character in the image is given an identifying caption.

First published in 1599 and again in 1601, this is the third edition overall of Udine's work. All editions are rare in census. 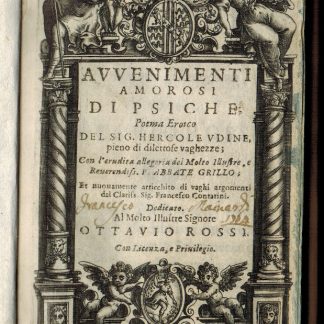