[Ironsides]. Some Account of the Family of Ironside, collected chiefly from the Parish Registers, Court Rolls, Historical Records, &c. &c. 1783.

Unrecorded sole edition of this printed study of a British family, presumably composed by a contemporary member of it. Although ostensibly printed in a small number of copies for private circulation, Henry Reynell (d. 1811) was a major London printer of his day. An interesting insight into the genealogical methods in use by the late 18th century, as well as a curious example of the printing of such research.

Studies of genealogy had long interested those of noble blood; the Ironsides, however, had never belonged to this class despite producing successful merchants, aldermen, and even a Mayor of London. The records collected by the present author were thus sourced from parish registers etc., and indeed by private correspondence with other Ironsides, some of which is reproduced here. No effort is made by the present author to link his name to Edmund Ironside (Edmund II), King of England for a brief period in 1016; the earliest recorded descendant is rather a certain Richard Ironside, recorded in the Court Rolls of Durham in 1497. The field widens in the 16th century to include a number of males and females residing in Lincolnshire, Dorsetshire, London, Bristol, and elsewhere; by the late 18th century there are notices of Ironsides as far afield as Bengal. The more illustrious Ironsides served as sheriffs, aldermen, bankers, and goldsmiths.

The author’s sources include notices in local newspapers from around the country (dated up to the year 1796), as well as examples of the kind of unsolicited correspondence used to trace such relationships: “Madam, You will, probably, be surprized at the Receipt of a Letter from a Person that has not the Honor to be known to you...”, etc.

The work is unrecorded in COPAC or the BL catalogue. Its signatures read A-E4, F2, with the lack of a catchword on the verso of F2 suggesting the work is complete as issued.

Not in COPAC or OCLC. 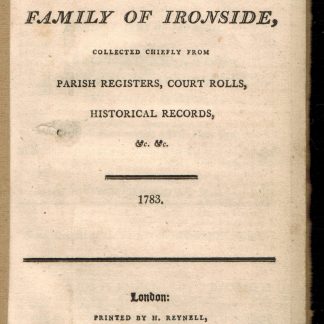 Sie sehen: [Ironsides]. Some Account of the Family of Ironside, collected chiefly from the Parish …London, 1801. € 350,00
In den Warenkorb