Johannes Collaert's Christ and the Apostles

Collaert, Johannes. Christ, the Virgin, the Twelve Apostles with the Creed and St. Paul.

Very rare suite of plates depicting the 12 apostles as well as St. Paul, with verses of the Apostle's Creed forming the cartouche to each plate. Full-length portraits of each saint are accompanied by a scene of their respective martyrdom in the background and the instruments of their martyrdom (St. Simon sawed in half; St Andrew and his wooden cross; St John boiled alive; St Thomas stabbed to death by Indians, etc.).

The set is exceptionally rare, including in Hollstein's census of Dutch and Flemish collections. The 'Old Hollstein' records the suite as 15 plates, as here; in the 'New Hollstein', however, a further 'title plate' is introduced to the entry. This supposed title plate is known in just one bound copy, in Brussels: it features personifications of Politics, Religion, Sciences, Military Service and Agriculture. On the balance of evidence, we suggest that this supposed title plate is in fact unrelated to the suite.

Hollstein does not mention any copies in American collections, and we have been unable to find any in OCLC. We have located an additional set (again with no ‘title plate’) at the Wellcome Library, however. This complete set of independently-published plates should not be confused with the abbreviated set found in a printed book (Sancti Fundadores Religiosorum, Ordinum in Ecclesia Laetiensis Monsterii, Antwerp, 1630) - which lacked the plates of St. James the Greater and the Virgin Mary. 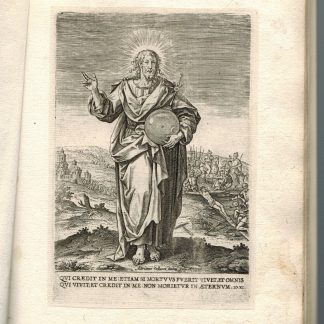 Sie sehen: Collaert, Johannes. Christ, the Virgin, the Twelve Apostles with the Creed and St. Paul.Antwerp, after 1592. € 1.850,00
In den Warenkorb