Separately-Issued Mezzotint of the Young Byron at Sea

Charming, large-format mezzotint issued to feed the cult of mid-century Byron devotees. The portrait depicts the poet in the most Romantic light possible: as a young man aboard a ship, seemingly alone with his hand upon the oar, cravat blowing in the wind, and chin resting pensively on his other fist.

The print was designed by C. G. Lewis and engraved by F. C. Lewis, after the original painting made by Byron’s friend the Comte d’Orsay. D’Orsay met Byron in Genoa in 1823 shortly before he embarked for Greece, but the painting was presumably completed after Byron’s death.

Uncommon. We note that a copy was only acquired by the British Museum in 2010. 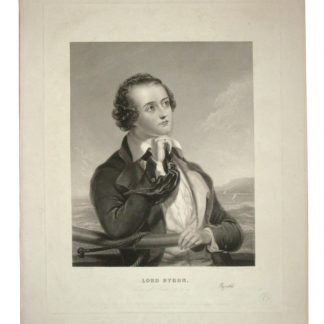