[Krusinski, Tadeusz Judasz?]. The History of Thamas Kouli Kan, Sophi of Persia. Translated from the French.

“Price One Shilling and Six-pence”. 8vo. (1) ff, ii pp, 163 pp, (1). Contemporary gilt-ruled calf (gilt faded) with title (also faded) lettered on spine. Extremities worn, corners bumped and chipped but holding perfectly; contents very good. Early ownership inscriptions of Richard Helmes and Ann Herbert, who begins to write a typical admonition: “steel not this book my honest friend for fear the…” but trails off before she completes it.

Very rare first English translation of this sensational account, which spurred numerous re-printings, piracies, and abridgements including an early effort by Samuel Johnson. A perfect ideal of the ‘Oriental despot’, the recent exploits of Nadir Shah (1698-1747) fascinated his European contemporaries as much as the shocking overthrow of the Ming Dynasty by the barbarian Manchus a century earlier. From humble beginnings as a shepherd-boy, Nadir's rapid conquest of much of Western Asia and his prowess as a military leader earned him (later) comparisons to Napoleon.

The present work by an unidentified translator was based on the Histoire de Thamas Kouli-Kan, Sophi De Perse published at Amsterdam earlier that year. Johnson’s 36 pp digest of the same account was also published in 1740 (ESTC T36459), whether indeed based on the French original or perhaps on the present English translation. While later editions ran to two volumes, incorporating yet more recent events in Persian politics, the present first edition is quite rare. The ESTC shows just four copies worldwide, with two in US institutions at UCLA and Minnesota.

Barbier mistakenly supposed the French original to have been authored by J. A. du Cerceau, but “this attribution is clearly incorrect, because the book deals with events up to 1739, while du Cerceau died on the 4th of July, 1730" (Lockhart, Nadir Shah, p. 315). Today, it is supposed that the Histoire was based instead on the accounts of the Jesuit missionary Kruzinski (1675-1756) who was active in the Safavid Empire between 1707 and 1728. 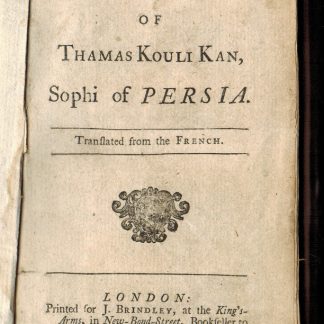