Extremely rare first edition of this work on the steam power, and its application to a wide variety of industrial uses (Morelli), appropriately bound with one of the earliest Italian works on the development of the technology of steam power and steam boats (Serristori).

1) Extremely rare first edition of this work on diverse industrial uses of steam power, one of the great inventions of modern times according to the author, which has not received its due in Italy. After a brief section on the physics of steam power and how variable amounts of water yield different results - showing an impressive grasp of its underlying math -, Morelli considers steam power a man-made analogue to the power unleashed by such natural phenomena as volcanos, whirlpools and earthquakes. He then explicates the engine’s basic functioning from chamber via robinet to chamber with reference to a diagrammed engine, moving on to the “infinite” uses of steam-based technology: steam powered trains and looms in England, printing presses in France Germany and England, flour mills in America. England and America are singled out for their inventiveness and restless innovations. There is something of an excursus on how the steam-powered loomed transformed Manchester (p. 25ff.) In this tale of technological progress, save on the theoretical or experimental level, Italy is nowhere to be found - a state of affairs the author ardently wishes to change.

2) First edition of one of the earliest - if not the earliest - books published in Italy on the steam engine and steam boat, describing and picturing in the finely detailed plates the steam engines of Thomas Savery (1698, patent submitted to RS), Thomas Newcomen (1712 “atmospheric engine”), James Watt (c. 1765), and 2 steam boats: the Elissa, the Etna (side view, architectural diagram, cross-section, and the wheel.) Serristori unambiguously credits Robert Fulton with the latter’s successful invention, is extremely well-read in the scientific literature on the engine’s development and scrupulously details historical voyages made in America and throughout Europe. As a maritime nation rich in navigable rivers, he emphasizes the steamboat’s obvious utility for commerce.

Morelli, Count of Todi, also wrote a treatise on analytic algebra and a work on the comet of 1832.

Serristori (1793-1857) was director of the Military College at Florence, and the author of numerous works on the population statistics in various regions of Italy.

Morelli: IT/ICCU/RMLE/ 035914;  OCLC lists no copies. Outside of Italy, where ICCU lists 3 copies, we have only located a scan at BL. Serristori: IT/ICCU/ TOOE/002586 mistakenly calls for (4) pp. Other records and the Google scan show this to be mistaken; OCLC: NYPL, Yale, Northwestern, UMI, SMU, Mariners Museum etc. 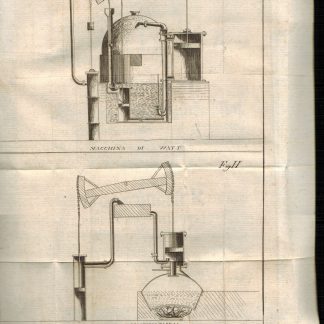