The Indulgence Which Went Too Far…

Rare first edition of this extensive study of the Porziuncula Indulgence, granted by Christ to St. Francis according to a highly apocryphal tradition. Despite its debatable origins the Porziuncula went on to become one of the most lucrative offerings of the Franciscan Order, and by the mid-17th century could even be obtained daily by the faithful. A Franciscan himself, Tofi’s Trattato is a lengthy examination of the historical, doctrinal, and legal debate surrounding this indulgence, and ultimately defends the practice fully by addressing a series of ‘doubts’ throughout the text. However, in 1693 Tofi’s work was placed on the Index following an investigation by the Holy See. A lovely, unsophisticated copy of this rare, prohibited work.

Throughout his work, Tofi quotes the Irish historiographer of the Franciscans, Luke Wadding (1588-1657) as well as Cardinal Bellarmine, Francisco Suarez, Thomas Aquinas, Duns Scotus, and numerous Papal Bulls. The historian of the Inquisition, Henry Charles Lea, owned and drew on Tofi’s work and recounts the scandal in his usual spirited way: “the craving for constantly greater privileges led [the Franciscans] to claim that the indulgence had been enlarged, so that it could be gained on every day of the year. They assumed that this had been instituted secretly by St. Francis, to be handed down by tradition among his disciples, and this secret tradition was spread abroad so successfully that multitudes visited the church on all the solemnities of the year, in the confident expectation of gaining it… Finally they claimed that this daily extension had been confirmed by Pius III, in 1544, when on a visit to the convent of S. Francesco del Monte at Perugia… At length the claim attracted the attention of the Holy See; in 1691 it was fully debated before the Congregation of the Inquisition, which disallowed it… while the books which had been written in its defence were placed on the Index.” (A History of Auricular Confession and Indulgences in the Latin Church, Vol 3, pp 246-7).

The engraved frontispiece (unsigned) depicts St Francis kneeling in prayer before Christ, the Virgin Mary, and dozens of cherubim, one of whom offers him the indulgence with the words “Haec est porta vitae aeternae”.

OCLC shows a handful of copies in European libraries, with only U Dayton and U Penn (Lea Collection) in America. No copy is recorded in COPAC. 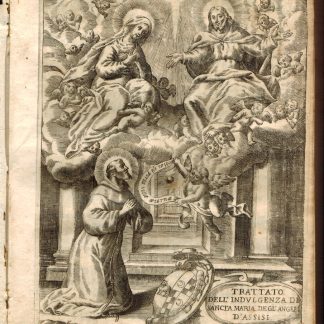