The (Unsolved) Case of Hendrica Leurs and the Forged Banknotes

Very rare first edition of this account of Hendrica Leurs, accused of having forged and passed into circulation a large number of banknotes. The work was published by Leurs’ attorney, whether to garner popular support for his client or simply to capitalize on the extreme notoriety of the case.

In 1836, Hendrica Leurs moved her thriving educational institute for ‘young ladies of the most civilized and decent disposition’ to the New Canal in Utrecht. Leurs had served as a governess to several prominent families before opening her own school, which enjoyed an excellent reputation among its well-to-do clientele. At the same time, however, counterfeit banknotes began to surface around the city - paper notes being something of a novelty, these had been rather patently forged with a pen on unwatermarked paper, imitating the engraved originals just about well enough to fool an undiscerning user. The trail of these bills inevitably led to Leurs’ fashionable boarding school on the New Canal, and she was arrested on October 14th, 1837.

The prosecution called for the death penalty; the trial in November was packed with eager observers. Leurs initially defended herself by claiming that she had received a large quantity of the notes from an Amsterdam cashier’s firm and had naively re-circulated them. The prosecution noted that Hendrica’s handwriting matched that used on the banknotes; when she fell under suspicion, she had immediately sought to burn the counterfeit notes in her possession, thereby incriminating herself further. Leur’s lawyer, Van de Poll, pointed out in her defense that it was extremely unlikely that she had committed the crime. She spent all her time in her school, surrounded at all hours by servants and pupils, and could not have had the time to manufacture the banknotes in secrecy. Why would this well-educated woman have mis-spelled the names of the President and Secretary of the Nederlansche Bank on the forged notes – especially when she was governess to the children of very good friends of President Muilman? Numerous clients of Leurs took the stand to testify to her good character; furthermore, all confirmed that Leurs was certainly not in dire need of supplemental income.

When Hendrica Leurs was acquitted on the 29th November (presumably after the publication of the present work), she fainted. In the following months she attempted to resuscitate her failed boarding school, but apparently to no avail. In 1839 she changed her name to Henrietta and left for Indonesia, establishing herself as a private tutor, where she died in 1870. The mystery of the forged banknotes of 1836/7 has never been resolved.

OCLC shows 1 copy in US libraries, at the New York Public Library.

With much obligation to Willemien Schenkeveld’s article on Leurs in the Digitaal Vrouwenlexicon van Nederland. 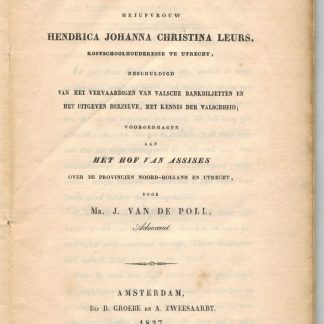