Very rare first edition of this popular, illustrated biography of Jacquard, the first to cement his reputation as a 'martyr'. Jarrige (2009) mistakenly supposes the first edition to have been published in 1850; in fact the present work is dated 1846, twelve years after Jacquard's death. We note just 4 copies worldwide in OCLC: 3 in French libraries, and one at Stanford.

Voivreuil draws heavily on the Comte de Fortis' much briefer Éloge historique (1840), and - “largely contributed to transforming the life of the inventor into that of a saint. It was [Voivreuil] who introduced the notion of 'martyrdom' as the matrix of the story: 'A true martyrdom was in fact in store for Jacquard, and that was just: he deserved it, as a man of genius' [this work, p. 95]. Drawing on Fortis in particular, Voivreuil clears the elites of Lyon of all responsibility by asserting that the Conseil des Prud'hommes, far from condemning the inventor, 'has, on the contrary, endeavored to popularize the Jacquard invention, faithful to the essentially progressive principles of its institution'. The responsibility [for the riots] rests entirely on the Lyon workers...” (Jarrige, translation).

Voivreuil also gives a good account of Jacquard’s inventions and in particular of the credit due to both him and Vaucanson for the development of the ‘cartons’ or punch-cards which heralded a new era of automation and the first ‘programmable’ machines.

The engraved vignette on the title-page shows the statue already erected to Jacquard in Lyon, while the three engraved plates depict the Deputies of the Cisalpine Republic visiting Jacquard in his 'humble abode'; Jacquard's son dying in his arms during the Revolution; and Jacquard being dragged by an angry mob to the banks of the Rhone river.

Some 8 editions of this work appeared up to 1869, but the first is decidedly rare. As mentioned above, we find just one US copy recorded in OCLC. 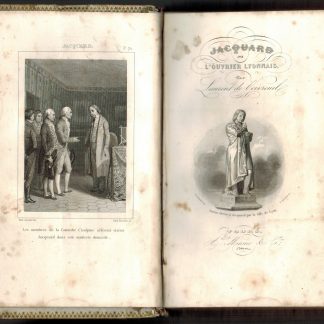