Rare first editions of three pocket-sized devotional works, containing 40 emblematic woodcuts reflecting on the Life of Christ and the of the Virgin Mary. The text is the work of the Jesuit Joost Andries, while each woodcut bears the monograms of both Jan Christoffel Jegher (1618-1667) and the painter and draughtsman Antoine Sallaert (1594–1650).

The first two works trace the Passion of Christ (beginning, like Bourgeois, with the Incarnation), re-using a set of 40 woodblocks in a different order between them. Harkening back to the Biblia pauperum, the format introduces the reader to each episode of the Passion in concert with a corresponding episode from the Old Testament; facing the woodcut is a ‘Typus’ or quotation from the Old Testament, which is echoed in the ‘Prototypus’, a theme from the Gospels.

The third work (“The Perpetual Sword of the Queen of Martyrs”) explains the Seven Sorrows of the Virgin Mary, a traditional subject of Marian iconography. Subjects of chapters include the seven reasons why the Virgin Mary precedes all other martyrs, fifteen cases from the Old Testament where the Virgin’s sorrows are preordained, and the Seven Sorrows themselves, each with a prayer facing. The work ends with an exhortation of the Virgin to the faithful, and acts of contrition to be carried out by the reader.

Joost (or Josse) Andries (1588-1658) was a teacher of Jesuit charism in Ghent, Mechelen and Brugge. The preface of the first work suggests his main sources of inspiration for these devotions were the Jesuits Joannes de Lugo, Robert Bellarmine, Leonard Lessius, Eusebio Nieremberg, and Vincenzo Carrafa; the Perpetuus Gladius Reginae Martyrum also includes quotations from the mystical writings of St. Bridget of Sweden (1303-1373) and Rupert of Deutz (c.1080-c.1129).

All three works were evidently popular, reprinted several times in Latin as well as being translated into Italian and French. Of these first editions, we have traced examples of at least one, and sometimes all three works, at four US institutions: the National Gallery, SMU, Harvard, and Boston College. 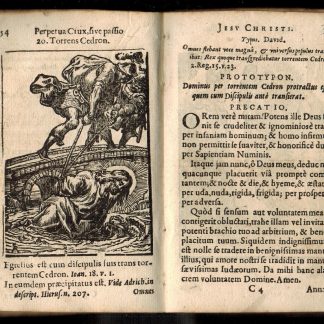