Counter-Reformation Devotions in a Contemporary Binding, With 94 Hand-Coloured Woodcuts, some Heightened with Gold

Very rare edition of this iconic Counter-Reformation devotional handbook, first published immediately following the Council of Trent. The present copy is unusual for its delightful state of preservation in a contemporary goatskin binding as well as the vivid, assiduous handcoloring which heightens all illustrations from the title vignette to the typographic ornaments. No other copy of any edition in OCLC notes the presence of any coloring. A pleasant example of the highly effective combination of devotional-polemical text and image characteristic of the Counter-Reformation in the Dutch Golden Age (cf. Parker, Faith on the Margins: Catholics and Catholicism in the Dutch Golden Age, p. 7n).

Verepaeus served as chaplain to a community of nuns near Mechelen, and it was here that he composed the present collection of prayers and a calendar of saints’ days. Following the conclusion of the Council of Trent in 1563, it was perhaps no co-incidence that the first edition of Verepaeus’ little book bore exactly the same title as Luther’s own, oft-reprinted Enchiridion piarum precationum (first ed. 1529). Later editions of Verepaeus’s book took on the title Catholicum precationum selectissimarum enchiridion, perhaps to distinguish them as the battlegrounds between the two denominations became increasingly murky. The present 1594 edition was the last edited by Verepaeus himself before his death in 1598.

The present copy has an additional quire of 8 leaves evidently bound in at the time. Thanks to it being the final quire bearing a colophon, we can at least identify the imprint: Augsburg: Valentin Schönig, 1593. Our fragment, containing the Seven Penitential Psalms, consists of signature F only, suggesting that the whole book contained only 48 leaves. According to VD16, Schönig’s only recorded Latin publication of 1593 is a wholly unrelated quarto, and we find no earlier or later Schönig production which seems remotely similar to the present work.

OCLC shows just a handful of copies of any edition of Verepaeus's work in US libraries. 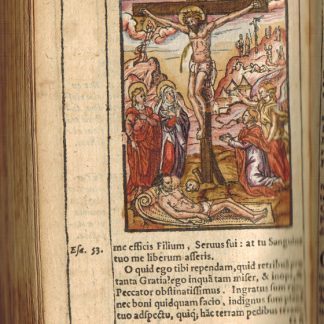