Arabic translation of the "Quotations from Chairman Mao Tse-tung", popularly known as the "Little Red Book". First compiled and published in 1964, by 1970 several billion copies were printed as every Chinese citizen was more or less obliged to own and carry a copy. After the book was approved for publication outside China in 1966, the Foreign Languages Press oversaw the translation and publication of the book into dozens of languages. The Arabic translation was first published in 1967 and printed not in China but in Egypt to influence the Pan-Arabist movement. According to an article in the Peking Review, China's official foreign newspaper: "The publication [...] was enthusiastically welcomed by the revolutionary Arab masses. Some of them began to read Chairman Mao's works on the street as soon as they bought them. [...] While working hard to print the Quotations, the workers at the printing house squeezed in time to study this treasured book of revolution" (Peking Review). The "Quotations" became the inspiration for the form, if not the contents, of Muammar Gaddafi's "Green Book".

With a stamp of the "Committee on New Alternatives in the Middle East" on the front endpaper and a faded Chinese stamp on the back endpaper; a very good copy. 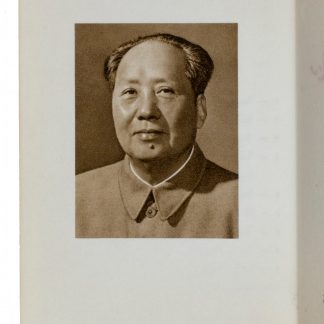