The alto parts for "Ruhethal" and for the beginning of "Jagdlied", the final two of the six songs that make up Mendelssohn's "Sechs Lieder im Freien zu singen", op. 59 (MWF F 21-22). The songs were composed for mixed a capella chorus, without accompaniment, between 1837 and 1843; the present songs were written on March 3 and 5, 1843. Dedicated to Henriette Benecke, his wife's aunt with whom the Mendelssohns lodged during their 1842 visit to London, the work was first published in 1844. The music in the hand of Amadeus Eduard Anton Henschke (1804-54), with the words of the text added by Mendelssohn himself, and his note and signature at the end of "Ruhethal": "Noten von Henschke, Text von Felix Mendelssohn Bartholdy".

A horizontal tear in the central fold and another near the bottom have been professionally repaired. "Ruhethal" and the edges of "Jagdlied" a little browned from former mounting and presentation. 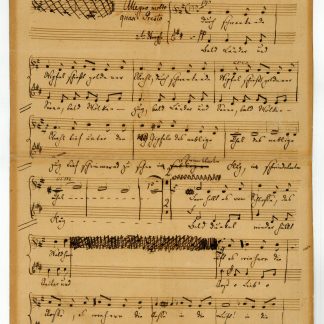