The complicated history of Stravinsky's "Perséphone"

To his friend, the patron, music critic, and tenor Pyotr Suvchinsky (1892-1985), correcting a note in the score of "Perséphone". As Stravinsky demonstrates with the help of two short musical notations of the "6th measure of the beginning", the last syllable of the word "mois-son" (crops) was to be sung in B and not in a higher D. The notations with French captions are followed by a short explanation in Russian, starting with the exclamation "For God's sake".

Stravinsky had invited his friend and fellow expatriate Suvchinsky to sing the part of Eumolphe in the production of the theatrical ballet "Perséphone". In a letter from 23 July 1933 Suvchinsky wrote to thank Stravinsky: "Your promise [of the part in "Perséphone"] is the first gift that I have received in Paris" (Levitz, p. 321). Nevertheless, the role was created by René Maison at the premiere at the Paris Opera on 30 April 1934.

"Perséphone" was a collaboration between Igor Stravinsky and the Nobel laureate André Gide. The famous dancer Ida Rubinstein had initiated the project in 1933 and later danced the lead role. For the libretto Gide revised a sketch from 1912, but the collaboration proved difficult, as Stravinsky took liberties in adapting the text to his musical vision. Ahead of the premiere, Gide distanced himself from the project, as he was dissatisfied with Jacques Copeau's staging and Kurt Jooss's choreography. Only much later did Gide acknowledge the quality of Stravinsky's composition. 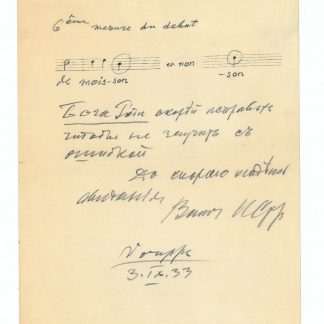