In his fourth travel book the British writer Waugh (1903-66), who was commissioned by the Daily Mail to cover events in Ethiopia in August 1935, makes a case for the Italian intervention in the country, presenting "a lucid and interesting narrative of personal experience, and useful as a minority defense of Italian occupation and attack on British policy" (Morris/Dooley). Interestingly enough, a printed sheet of paper denying the oil magnate Francis William Rickett access to travel facilities to Persia and the states on the Persian Gulf is loosely enclosed. On the journey from Port Said, Waugh met Rickett, who was dispatched by the African Exploration & Development Company to conduct secret negotiations with the Ethiopian emperor Haile Selassie in pursuit of a concession. While Waugh was up country, sidetracked by another story, Rickett was conferring with government officials in Addis Ababa at the dead of night. After a week of to-ing and fro-ing, papers were signed by which about half the nation's subsoil rights - an area of nearly 400,000 square km - was made over to Rickett for a period of 75 years. By the time he sailed into Suez, the story had made world headlines. Waugh, for his part, missed the scoop and was sacked.

A few marginal notes in pencil, some of them highlighting passages that also appear in Waugh's 1938 novel "Scoop", a satire of sensationalist journalism and foreign correspondents. Newspaper clipping with excerpts of a review of "Waugh in Abyssinia" from the Times Literary Supplement of 7 November 1936 is loosely enclosed. 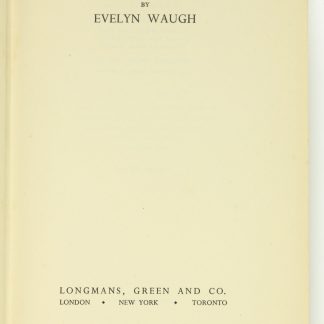