"Did he inherit? Because Redon was far from rich": Gauguin's bid to sell "Where Do We Come From? What Are We? Where Are We Going?"

Important letter to his friend, the painter and collector Daniel de Monfreid (1856-1929), concerning his delayed move from Tahiti to the Marquesas Islands, conflicts with his new patron Ambroise Vollard, and the potential sale of Gauguin's seminal work "Where Do We Come From? What Are We? Where Are We Going?". Gauguin complains that he has not received letters from Monfreid or Vollard, probably expecting cash transfers: "I received your letter from 6 Mai by chance from a sailing ship. Excellent letter that was promising for the coming month and I had everything prepared for my departure for the Marquesas Islands. Unfortunately, neither from Vollard nor from you any letter. Naturally, I cannot move [je reste en panne] until the next courier." Gauguin considered relocating to the Marquesas Islands, as Tahiti was experiencing a flu epidemic and supply problems in 1901. Apart from these practical reasons, he was still longing to find inspiration in an untouched paradise. The financial security provided by the deal with Ambroise Vollard made the move possible, but their relationship was marked by distrust, as the second part of the letter shows. Gauguin assures Monfreid that he can sell paintings predating his contract with Vollard and new works exceeding the 25 he was obliged to sell to Vollard annually: "You are wrong to worry about the canvases that you are selling apart from Vollard - 1, I did not make the contract for everything with him, setting a maximum of 25 canvases. 2, The canvases you have were made and sent before the contract. It is true that they arrived late but de facto he has no claim." Gauguin even accused Vollard of trying to take possession of older paintings: "Speaking of which, many old canvases that he knows of are for sale, and I would like for him to forbear his advances concerning them because I could not work for a year".

These older paintings included Gauguin's monumental "Where Do We Come From? What Are We? Where Are We Going?", painted in 1897/98 but still unsold in 1901. His friend, the symbolist writer Charles Morice had proposed to form a consortium of buyers who would then sell it in Luxembourg. Although Gauguin was skeptical about the financial power of this consortium, which was to include Odilon Redon, the prospect of selling the painting enthused him: "Another thing - I received a letter from Ch. Morice who tells me that he has high hopes to buy my big painting in a group and sell it in Luxembourg. It would be very significant if it succeeds. I thus gave him some names like Fayet and Bibesco who could support the effort. If it works, it would provide great facility for a year because of the sale and it would bring a new clientele. If you see Meilhorat, maybe he would run for his share. In his list of names of participants Morice cites O. Redon. Did he inherit? Because Redon was far from rich. It would also be necessary to see Vollard in case he would claim ownership of the painting, which would be entirely false [...]".

Gauguin's skepticism was justified, as Morice's plan failed. Nevertheless, the painting was sold that same year through Vollard to the vintner and collector Gabriel Frizeau and later to the Boston Museum of Fine Arts.

The charming woodcut letterhead, showing two tropical birds above Gauguin's monogram, was also used for a letter to Charles Morice from July 1901 in connection to his plan for the sale of the painting (Boston Museum of Fine Arts, 58.594). The letter at hand has a better impression of the woodcut. 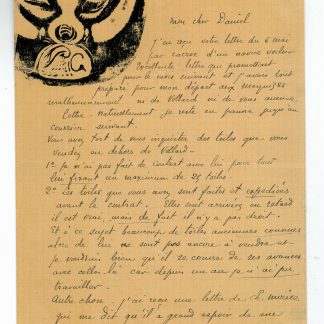