Courbet in exile: a desperate plea for amnesty and family disputes

Important, unpublished letter (in French) to his last assistant and confidant Cherubino Patà (1827-99) concerning a petition to the members of the two chambers of the French Parliament and Courbet's bitter conflict with his brother-in-law, the painter Jean-Baptiste Reverdy. Courbet had been living in Swiss exile since 1873, following his role in the destruction of the Colonne Vendôme during the Paris Commune, 6 months in prison, and an unpayable fine amounting to the costs of the monument's restoration, which was carried out in 1875. Disappointed by his lawyers, Courbet decided to petition for amnesty and asked Patà to deliver 800 copies to a Mr Bonnard at the "publication office", who was responsible for sending the letters to all parlamentarians and several French newspapers. To finance this campaign, Courbet asks Patà to sell a winter landscape painting, possibly "Effet de Neige" (1866-68), for 500 francs through Patà's wife. He emphasizes that it is "impossible to live in a situation similar to mine for three years, even longer", that he counts on Patà "in an absolute way because it [his situation] is extremely grave", and thanks his friend wholeheartedly: "I thank you very much for all the troubles you went through for me and for my interests [...]". The liberal politician and pioneering art critic Jules-Antoine Castagnary, who was an intimate friend and close ally of Courbet, is mentioned as having received the letter for corrections, but Courbet was too impatient to wait for his response, instructing Patà to visit Castagnary personally instead. Victor Hugo, another friend and ally of the painter, is mentioned as having prematurely pushed for an earlier amnesty vote for the Communards, possibly the one in 1874, that in Courbet's eyes was doomed to fail: "As I have already told you, I was sure that the amnesty would not be voted through, Victor Hugo went for it too early". However, Courbet's effort was equally fruitless, and he died in exile of a liver disease on 31 December 1877, days before the first instalment of his fine was due.

The painter Jean-Baptiste Reverdy was the husband of Gustave Courbet's eldest sister Zoé. He was involved in the sale of Courbet's paintings but the two men eventually fell out. Courbet details Reverdy's method to smuggle paintings to France in moving vans and mentions that he stores them at the mill of a Mr Jars, Courbet's "regular receiver". Angrily, he calls Reverdy a "mackerel" (French slang for a pimp), announcing, "we have to hope that we will go to Ornans to cut his throat and take what's left from his thefts", but also joking about not recognizing one of Reverdy's landscape paintings hanging next to one of his own when Cézanne's muse (and later wife) Marie-Hortense Fiquet paid him a visit: "I was an idiot such as one should not be when Miss Fiquet presented herself at my place. Imagine that my landscape was accompanied by a landscape in upright format by Mr Reverdy that I did not recognize initially and it is he who had sent it to me".

In closing, Courbet emphasizes the importance of the circular once more, adding that "it is better than Mr Lachaud and Mr Duval", his lawyer and his physician.

Traces of folds. With some minor tears and minimal foxing. 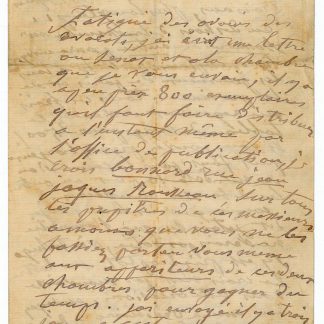