The first history of Cyprus in modern Greek

Only early edition of one of the most famous and important histories of Cyprus, the first ever published in modern Greek. Written by Kyprianos, an Archimandrite of the Church of Cyprus, it covers most of the long period of Ottoman rule in the island (1571-1878). The dedication to Archbishop Chrysanthos boasts a fine half-page allegorical engraving in which a map of the island is included. When the work was republished in Lanarca in 1880, it was the first book ever printed in Cyprus.

"It were much to be wished that the gratitude of his countrymen had preserved to us some account of the author. He was born at Koilanion, in the District of Limassol. Sakellarios says he studied at Padua, and wrote his work at Venice. The history begins with the days of Kittim, great-grandson of Noah, and ends in 1788. Down to the Ottoman conquest he is uncritical and out of date, but it is his great merit first to have attempted a general history of Cyprus in the language spoken by two-thirds of its inhabitants: and for the careful details he gives of the re-organisation of the island by its Turkish conquerors every student should be grateful" (Cobham, Excerpta cypria, p. 344).

Copies are known in only four libraries worldwide: Harvard (Houghton), the British Library, Leeds, and the Cambridge University Library (Cobham's copy). Several reprints of this landmark work appeared, the latest a facsimile published in 1971.

Preserved in its original binding, externally as well as internally as clean and fresh as if it had just left the press of Glykis, this is a perfect copy of an exceedingly rare work, never seen in the trade. 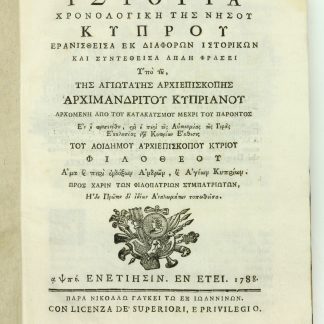