An album assembled by John Drinkwater for his daughter Penelope Ann, celebrating the first years of her life from her birth in 1929 to her fifth birthday with a collection of letters and ephemera from literary and political figures of the day, and including an encounter with royalty. Despite being in the running for Poet Laureate, as the Low cartoon included here suggests, the position was taken by John Masefield after the death of Robert Bridges in April 1930. The collection comes from the family of Penelope Drinkwater.

Comprises: notes written by the Prince of Wales (the future Edward VIII) for his speech at the Stage Golfing Society Dinner, Savoy Hotel, 2 Nov. 1930 ("Handicapp / B-DARWIN / Filthy golfer / Filthy speaker / Keep pun clean"), accompanied by an explanatory letter from Drinkwater ("I was the guest of Sir Gerald du Maurier who sat between me and the Prince of Wales [...] The response was made by the Prince, and he put his notes on two sheets of paper. These were pocketed by Sir Gerald, and he gave me one of these for you [...] another scrap of history in a tiny way for you when you are growd up"). Also, some 50 autograph and typed letters by Edward Elgar (thanking him for the "exquisite Penelope's Trees - a beautifully inspired poem"), Arnold Bennett, John Galsworthy (including a poem in her honour), Hugh Walpole, Joan Sutherland, Sybil Thorndike, Harold Nicholson, William Rothenstein, Herbert Hoover (two on White House headed paper), E. G. Robinson, Ramsay Macdonald, and others; a menu from the Savoy Hotel, 24 June 1930, signed by Drinkwater, J. B. Priestley, H. G. Wells, Arnold Bennett, Edgar Wallace, Desmond Macarthy and others, with another from a dinner on 19 September 1930 inscribed by Max Beerbohm ("to dear little Penelope Anne. I know she is little because she is so young. And I know she is a dear because I know her parents"); ephemera including a programme for Drinkwater's play "A Man's House" signed by the cast (with Errol Flynn as 'First Soldier'), telegrams of congratulations (including James Joyce and John Galsworthy), a printed copy of Drinkwater's 1930 poem "Penelope's Trees", inscribed "This copy is darling Penelope's own / John Drinkwater", numerous photographs and press cuttings of the family, etc.

The folder of loose correspondence includes H. G. Wells (postcard, "warmest thanks for the poem. It's a nice habit this poetry" and autograph letter to Miss Jeffreys sending love to Penny, "I think she is a dear"), a pencil drawing annotated "sketch by T[homas] H[ardy] of a hay-knife", Edmund Blunden ("I would like you to leave me out of your anthology"), Vita Sackville West ("She seems to be a fruitful source of inspiration to you"), Eddie Marsh, Shane Leslie, Stefan Zweig, and others; with a printed Churchill address from 25 April 1925 with covering letter, as well as typed transcripts of letters by Rupert Brooke and others.

The David Low cartoon, signed "Low" and titled "Situation Vacant", depicts Drinkwater, Masefield, Kipling, Edith Sitwell and other possible candidates for the post of Poet Laureate lining up to see the Prime Minister ("W. B. Yeats and W. H. Davies arriving by the next bus"), labelled "The Property of Penelope Ann Drinkwater" on reverse. 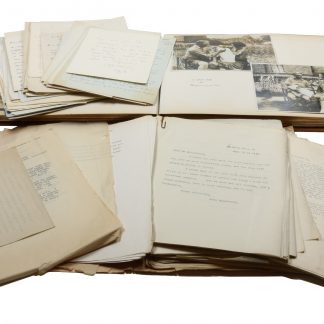