World War I. - Baghdad and Mesopotamia. Archive relating to the British transport corps ("Remount Depot", and "Mule Column") based at Baghdad.

Archive relating to the British transport corps ("Remount Depot", and "Mule Column") centred at Baghdad. An evocative diary kept by Lt. Smith captures both the horror and beauty of his daily life: "Never shall I forget the pain & terror in that poor little thing's face. I had nothing to help it & they were miles from any habitation [...] without food and medicine" (13 May, near Qara Tappah). The diary was written whilst he was serving with the No. 3 Mule Column, a section of the Transport Corps stationed in Mesopotamia, to which he was assigned in June 1917. It includes mentions of Qara Tappah, Baguba, Abu Jisra, Hillah (March 3, visiting "the house built by the German excavators who have done so much here" and the Babylonian remains, which Gertrude Bell had visited in January), Abu Saida (31 March, "I killed 1000 flies in my tent"; April 5, "Changed into my light underwear"; April 17, "Saw streams of Kurds & Arabs on the road [...] on the trek with camels"; April 23, "held a court martial [...] of Hazzat Shah [...] for theft from a mail bag, found him guilty & sentenced him to 30 lashes"), Table Mountain (trip with his orderly, Mohammed Qasim, whose photograph is included), Kifri and environs of Baghdad (29 April, "Tuz Khurmatli [Khurma] was taken today and nearly the whole of the Turkish force killed or taken prisoners"; 2 May, "Passed the 2 lots of Turkish prisoners [...] one prisoner of the first lot died on the way [...] they are evidently hungry and tired").

The majority of Smith's letter book correspondence relates to his ordering books on India from Mudie's Select Library, Higginbotham in Madras (from where he purchased his Lett's Diary) and elsewhere, or selling others (12 April 1920, placing an advert in the Baghdad Times, "For Sale. Palmer's Arabic Grammar"). Smith's record of the No. 3 Mule Column Fund records Receipts ("Sale of a consignment of cigarettes for the column", "Proceeds of the sale of parts of two Turkish carts") and Expenditure ("Football, 2 bladders & one tube cement", "Sweets for the the Peace celebrations"). The entertainment programmes include pantomimes ("Red Riding Hood", "A Gipsy Romance" by the Advaxeliers at the Baghdad Depot Theatre), and an Olympia Cinema listing printed by the Dangor Press, Baghdad. 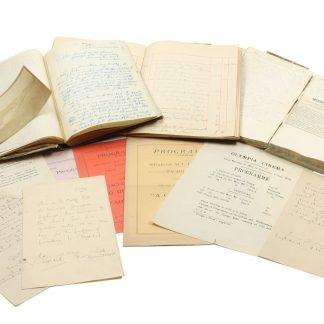