Wall map of the petrol producing countries of the world

An unusual vintage wall map, issued by the French League of Petrol Producing Associations, showing the state of petrol producing countries of the world in the late 1950s: the locations of oil fields and production and refining regions, exportation routes and terrains of possible reserves.

Yellow circles of varying sizes represent the key regions that produce oil, with the size of the oil rig towers representing the amount of crude oil produced. The red areas represent operating oil fields, while green regions are sedimentary lands that are likely to contain petroleum. Grey arrows show the primary exportation routes throughout the world for petroleum products. A number of inset maps contain further interesting detail, such as a map showing the change in petroleum distribution as a result of the Suez Crisis in 1956, and maps of Venezuela, the United States, and the Middle East locating current pipelines, pipeline projects, and refineries. The two graphs show the change in crude oil production between 1900 and 1956 in the key regions, as well as the evolution of the primary sources of energy (coal, oil, natural gas, and hydraulic power) worldwide during the same time period. 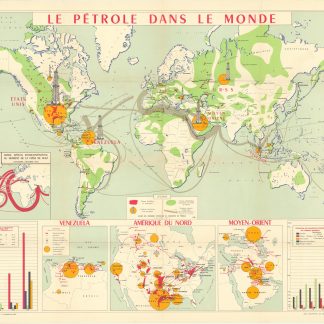