Complete set of this finely illustrated survey of Canadian scenery edited by the principal of Queen's University in Kingston, Ontario, George Monro Grant (1835-1902), in the 36 original livraisons as issued, instead of being bound (as is more common) as a two-volume set. The work features landmarks of major Canadian cities, including Quebec, Montreal, Ottawa, and Toronto, as well as rural areas and impressions en-route, including a journey from Toronto to Lake Huron. From the time that Cassell began its sumptuously produced "Picturesque Europe" in 1876, the publisher issued many important topographical works. The "Picturesque" series, describing in turn Europe, the USA, Canada, the Mediterranean, and Australia, employed many famous artists, writers, and travellers, and consistently maintained a high level of illustration and production.

Red and black title-pages bound at the end of issue 36.

Partly uncut. Extremities slightly bumped, more prominently in issue I, which is also somewhat duststained. Interior crisp and clean. A good copy of this ambitious work. 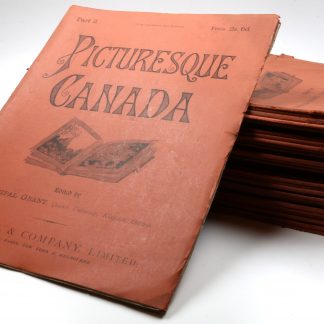