Rigby, C[hristopher] P[almer]. Report on the Zanzibar Dominions. (Selections from the Records of the Bombay Government. No. LIX - New Series).

First edition. Author's presentation copy to his wife, inscribed "Matilda Rigby from the Author" on the upper cover.

A scarce copy of this "comprehensive and informative survey of the sultanate" (P. J. L. Frankl, ODNB), covering the country's historical links to Oman and the Sultans (the Arabic dynasty of the Al-Saids ruled Zanzibar until the revolution of 1964), the island's trade (including in slavery), geography, populations both native and Arab, as well as the Sultan's person and style of rule. The account was written by C. P. Rigby (1820-85) at the end of his three-year posting as the East India Company's agent, and British Consul in Zanzibar, from 1858 to 1861. He married Matilda on his retirement from the army in 1867. 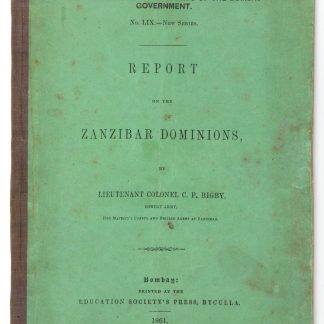