Najaf Quli Mirza / Khayyat, Assad Yaqub (transl.). Journal of a Residence in England and of a Journey From and to Syria, of Their Royal Highnesses Reeza Koolee Meerza, Najaf Koolee Meerza, and Taymoor Meerza, of Persia. To which are prefixed some particulars respecting modern Persia, and the death of the late Shah.

First edition. The intriguing account of the three Persian princes' flight to England after the capture of their father, Hosayn Ali Mirza (1789-1835), briefly self-proclaimed king of Persia, by the forces of Mohammad Shah (1808-48), his nephew and heir-apparent.

The journal describes Lebanon, Alexandria, Egypt, and Africa, as well as providing details about the princes' sojourn in England. Prince Najaf mentions the efficiency of the British mail service, the annual meeting of schools at St. Paul's Cathedral, and the London Zoo, as well as formal dinners held at the Marquis of Salisbury's or Lord Palmerston's places. Also, he praises the English railroads, by which one may cover "the incredible distance of forty miles an hour" with the "travellers becom[ing] like birds" (vol. II, p. 12), and concludes with descriptions of Bavaria, Austria, Hungary, and Walachia. His account is prefixed by a history of the events following the death of Fath Ali Shah of Persia (1797-1834).

While King Hosayn Ali Mirza was overthrown and imprisoned in Tehran, where he soon died of cholera, three of his 19 sons, with the prompting of their father and apparently assisted by some minor British consular officials acting without instructions, managed to escape from Persia and make their way to England, at first causing some diplomatic embarrassment but thereafter enjoying the protection and pensions of successive British governments. Before going to London, Reza Quli Mirza, Najaf Quli Mirza, and Teimur Mirza spent a month in Damascus with the British envoy John William Perry Farren, who provided 25-year old Assad Khayyat, his dragoman and the translator of the princes' travelogue, as their interpreter.

The frontispiece shows a facsimile of a letter by Najaf Quli Mirza to Khayyat. Bindings rubbed, most prominently at head and foot of spines and along hinges (professionally repaired). Still a good set; rarely seen at auction. 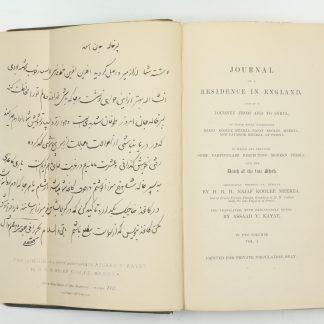