London, Methuen (printed in Cambridge by W. Lewis, at the University Press), (1928).

4to (210 x 268 mm). XIV, 176 pp. With 2 colour-printed plates (one bound as a frontispiece) and 9 plates in monotone. Publisher's original blue cloth with gilt title to spine, upper cover stamped in gilt and blind. Top edge gilt.

A history of Persian navigation and trade from the earliest times to the sixteenth century. First edition, on hand made paper, one of 250 signed copies (but number and signature erased). With a preface by Muhammad Iqbal.

The Indian scholar Hadi Hasan (1894-1963), a native of Hyderabad, was educated at Cambridge in geology, botany, and chemistry. "On his return to India he played an active role in the freedom movement against British rule and was praised for his work for independence by Mahatma Gandhi" (Encyclopedia Iranica). He subsequently completed a Ph.D. in Persian at the University of London before being "appointed professor and head of the Department of Persian at Aligarh Muslim University, a position he held until 1958" (ibid.).

Occasional insignificant fingerstains; slight paper flaw to title-page from erasure of the number. Binding rubbed and faded, extremeties a little bumped, but well-preserved on the whole. 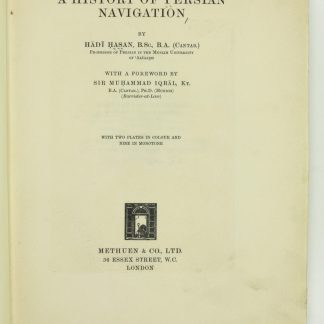